“It was 1982 going on 1932,” laughs Richard Anderson of Savile Row’s antiquated culture when, aged 17, he began his apprenticeship with Huntsman – one of the oldest and most revered houses on the street. “It was run with rigid, old-fashioned discipline – you were constantly spoken to in a curt manner, and you had to think on your feet, but I loved the challenge of it. Coming from my comprehensive school in Watford, it was quite a culture shock.”

This strict day-to-day drilling honed and whetted the young Anderson’s cutting and tailoring smarts, but what would really determine his future during these formative years was the relationship he forged with Huntsman’s managing director, one Brian Lishak. Now one of The Row’s most lauded veteran – he celebrated his 60th year on The Row in late 2016 – Lishak has an unrivalled arsenal of Savile Row anecdotes. He once, for example, had to break it to Steve McQueen that a dozen garments, all made by hand taking 90 hours of work per suit, would not be achievable in just two weeks. When The Beatles played their famous rooftop concert at Number 3 in 1969, Lishak was there, watching the whole spectacle unfold. Katherine Hepburn, Paul Newman and Gregory Peck have all been on the receiving end of his warm, affable but never obsequious mode of customer service (“Savile Row is a great leveller,” he says of his approach), as have untold numbers of international royals and dignitaries.

It was after almost two decades as close colleagues that Anderson and Lishak set up shop together in February 2001. “Back then we didn’t even have a shop,” the latter recalls. “Richard had a cutting board in his garage at home in St Albans and would come to London to see customers in their hotel rooms, houses and so on, while I had a little office in London.” Success came before too long, though, thanks in part to the pair’s hungry approach to international sales. Early on in his career, Lishak had frequently taken four-and-a-half month trips to America, crossing the Atlantic by boat and then criss-crossing the country on sleeper trains, measuring up customers in all the major cities (recently, in New York, he fulfilled an appointment with one elderly customer who he first measured back in the winter of 1957). 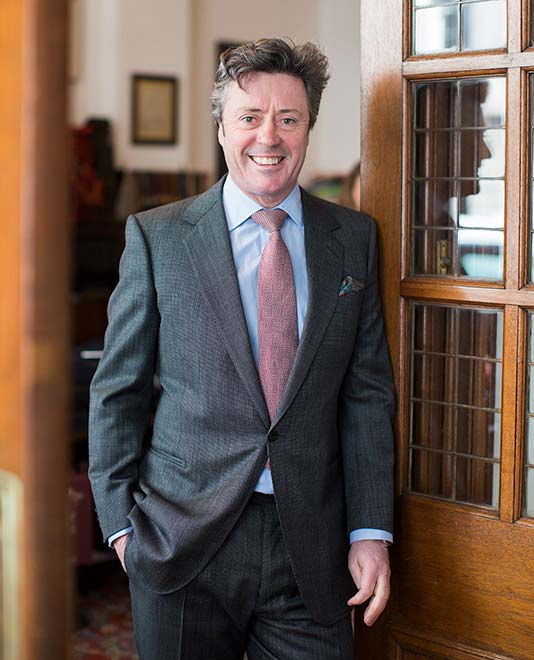 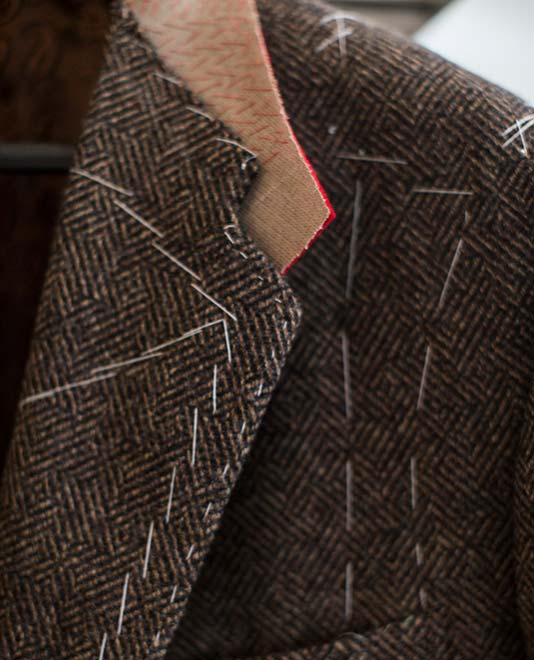 Fast-forward back to the early-2000s, and a densely packed sales tour across The Pond proved the making of the fledging partnership, and America (along with Japan and Europe) remains a major market for them to this day. “We go three times a year for about three weeks or so,” says Anderson, “to do fittings there, take orders, generally service our customers.”

The other key tenet of their partnership, from the start, has been a less formal approach. “We’d come from a classic Savile Row house, and our feeling was that we didn’t want that same exclusive club-like atmosphere,” explains Anderson. “Hackett, who were here at No 13 for a year before us, had refurbished the premises and it was already very clinical, very minimalistic – the style at that time – and we decided to make it warmer, more attractive to people who perhaps were not used to going into Savile Row establishments.” The pair also opted for first-name terms with clients (“Before it had been all ‘Mr’ and ‘sir’,” recalls Anderson). 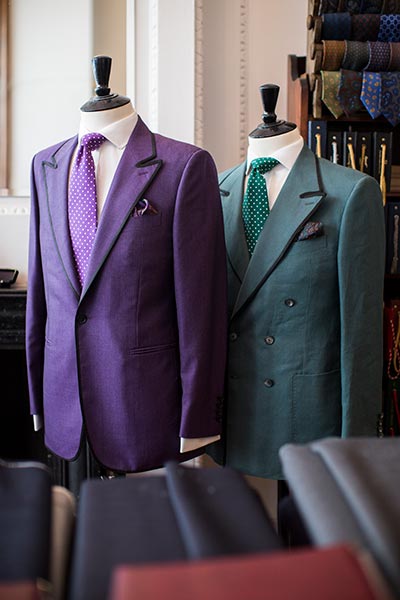 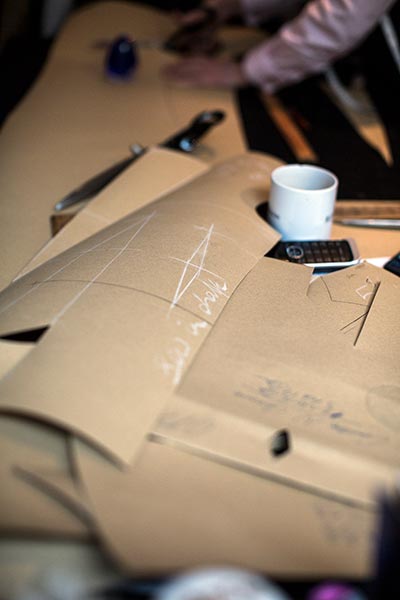 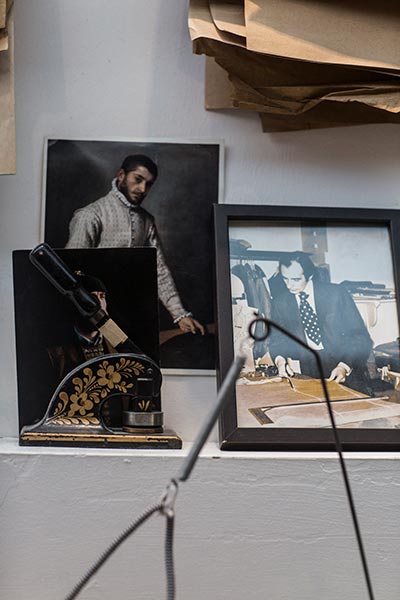 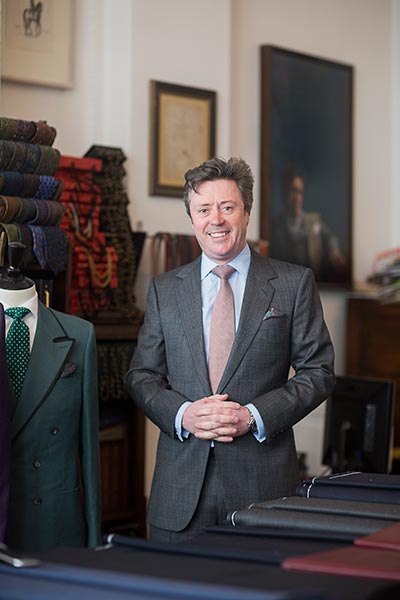 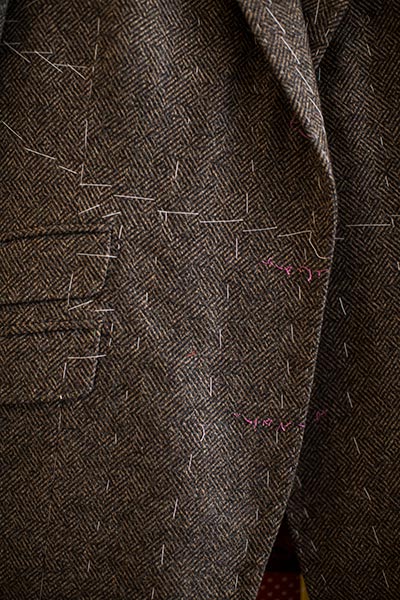 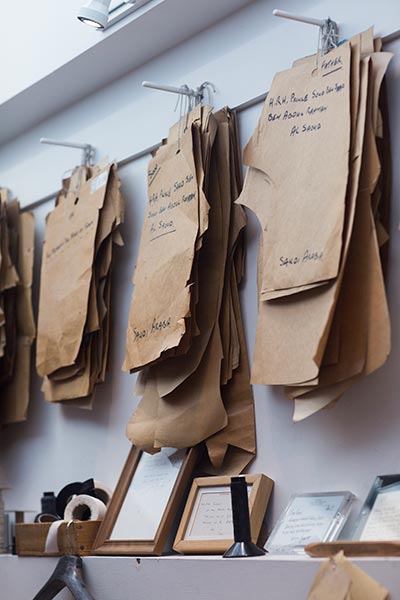 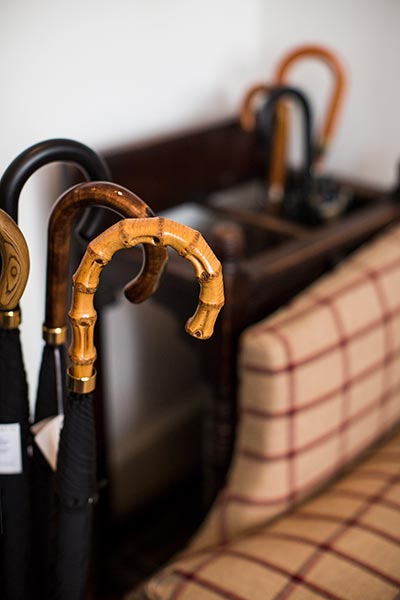 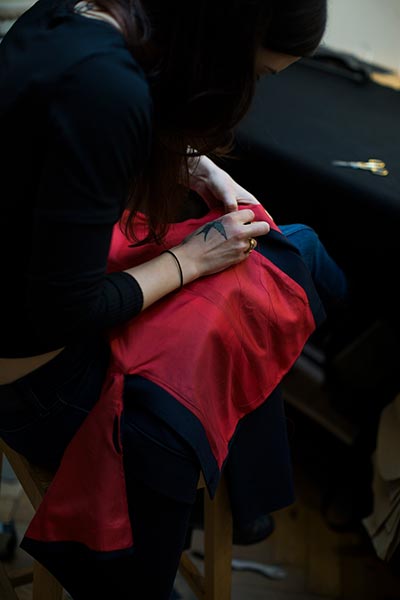 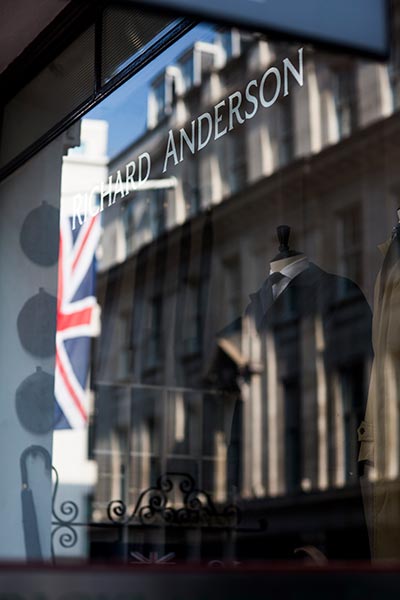 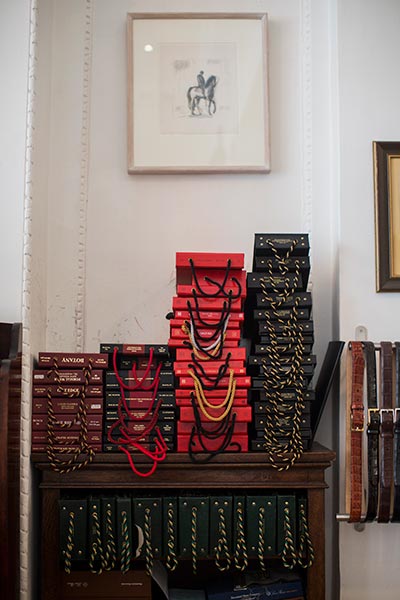 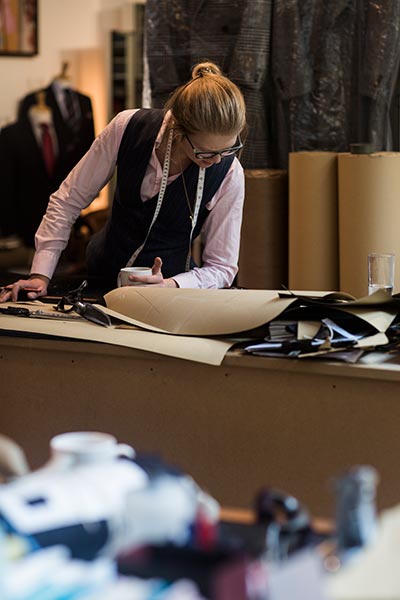 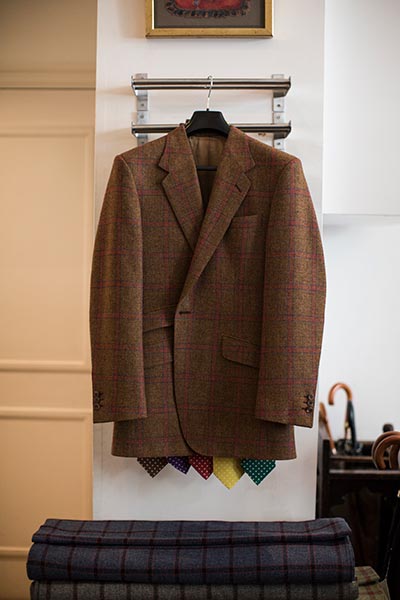 They also favour a fresh approach when it comes to style and method. Anderson says that this is one of the only tailors that still applies sleeves to shoulders by hand rather than machine. “This gives a crisper, better-formed bespoke look to the garment, as well as maintaining the shoulder line over time,” he says. And the house pattern-making technique is unique too, albeit derived from a traditional method called The Thornton System, which Anderson learned under the tutelage of two legendary Huntsman master cutters, Colin Hammick and Brian Hall. “It sort of takes the concept of a riding jacket and crosses it with a dinner jacket, with one button,” he says, “but within that framework, you can do what you want – make the lapels wider and so on.”

In his 2009 book Bespoke: Savile Row Ripped and Smooth, Anderson quotesfrom the 1804 Dictionary of English Trades to describe the cutter’s calling: “To create a good shape where nature has not granted one”. To demonstrate what this means, Anderson and Lishak lead us over to a mannequin on which is draped a riding jacket in rust brown with red and blue over-check, made especially for Lishak’s 60th anniversary celebration. “Can you see how we’ve put some padding in the shoulders but there’s no rope to the sleeve-head?” asks Anderson. “The armholes are high, partly for ease of movement but also to get a nice long line down the side seam, which helps to make people look taller and slimmer. We place pockets a little higher than the norm, likewise the vents, and that also turns up the perception of a good stature and height.

“It’s all in proportion, designed to grip you and look fitted but not be restricted.”

“We’ve got a nipped in waist – we start our waist-runa little higher than most - and a slanted, flapped lower pocket with an outside ticket slot. On a lounge suit we’d normally have straight pockets, with or without a flap, but on tweed, slanted looks more sporty. We have a nice slim sleeve, regular lapel, and what we do is put a little curl here on the sides of the top collar – one of our signatures. The overall effect is something that’s going to stay relevant. You’re not going to put it on in 10 or 15 years and think it’s gone out of date – it’s a real classic. It’s all in proportion, designed to grip you and look fitted but not be restricted.”

In other words, dignified, debonair and traditional without being in the least bit stuffy or antiquated. Which pretty much makes the garment the epitome of this, a relative newcomer on Savile Row, and one of the major protagonists in classic gentlemanly elegance’s modern revival.