The Art of Craftmanship

On The Row: Huntsman

Surely, there is no more arresting repository of curios on Savile Row than Number 11, home to Huntsman since the company moved here in 1919 following its work during the First World War, supplying uniforms to the British military, and its attentions about to turn to the roaring twenties instead.

The two stag heads gazing down from either side of the main mirror on the left were left behind by a customer who nipped out to get some lunch in 1921, got caught up in some kind of boisterous revelries and never returned. The framed, faded Royal Warrants on display testify to the impressive number of European monarchs who have, over the decades, crossed the threshold of a house often seen as the epicentre of British bespoke tailoring. Meanwhile, plenty of Savile Row establishments double as sartorial museums, but the selection of garments on display here is truly eye-popping: a lapel-less frock coat bearing two large, sequinned peacock feathers, originally commissioned for David Bowie; Eric Clapton’s old hunting garb, returned to its birthplace following purchase at an auction; the frock coat Gregory Peck wore in The Million Pound Note. There’s even a coat, displayed on a mannequin inside out to show off a silk lining on which is printed a work by Francis Bacon.

Of all the garments on display, though, the one which perhaps tells us most about this house’s rich narrative is a pair of 140-year-old riding breeches, worn by five generations of the Huntsman family and brought back from Zimbabwe by the family a couple of years a ago. The garment serves as a stark reminder that, when first founded in 1809, when it operated from a shop at 126 New Bond Street, Huntsman was a “gaiter and breeches maker”. It also testifies to the firm’s wish to remain true to its roots. 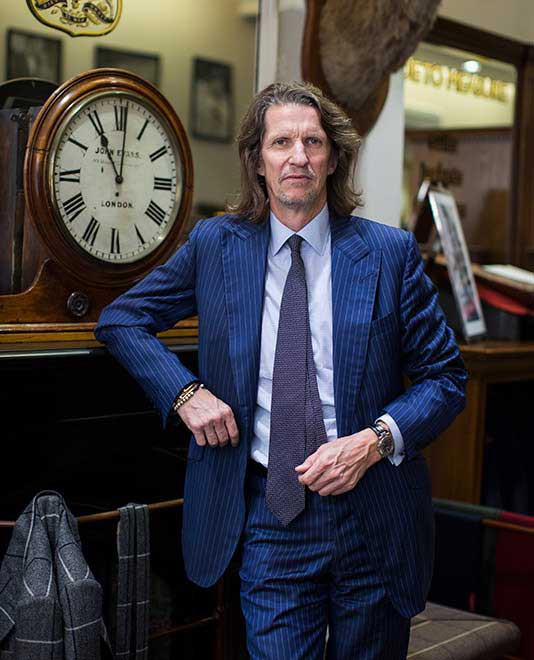 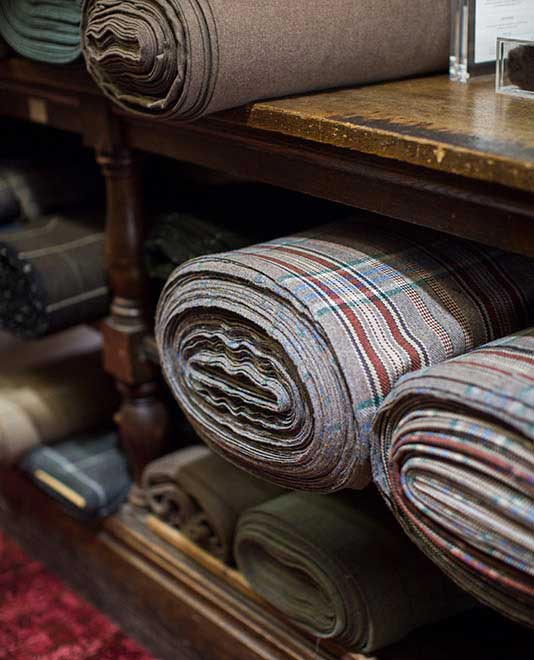 “The house style is to this day derived from riding and hacking jackets,” says Campbell Carey, Head Cutter and Creative Director. “The main thing about that kind of jacket is, it needs to stay snug when you’re riding a horse, so it’s close-fitting through the chest with a high armhole, high waistline and a long skirt. It also has a strong but natural shoulder line – we don’t use any thick padding, and work with the customer’s shoulder – which is very distinctive. We do trunk shows all round the world, and you can spot a Huntsman jacket walking down Madison Avenue a mile away.” Much of this powerful signature jacket cut, it must be noted here, is attributed by informed Savile Row scholars to one Colin Hammick: a sartorial legend who joined Huntsman at age 14 in 1942 and became head cutter by the 1950s. Hammick, it is said, changed his suit up to four times a day.

Back in the present, Ayrshire-born Carey says that he’s learned an abundance of trade tricks during his time with a tailoring house he’s always regarded as “the jewel in the crown” of London tailoring. “I thought I knew it all, but coming here I saw so many new little nuances and techniques – unique to Huntsman and passed down generations – that are part of the fabric of the place,” he says. “We do a lot of shooting clothes, field clothes, and there are pockets and details I’d never seen before until coming here: things like pinch pleats under a half-belt, rather than full shooting pleats, which gives lots of shape and ease of movement across the back of the jacket, and pockets with box pleats so that when you put cartridges in it, there’s plenty of room, but when you’re wearing it around town the pocket’s completely flat.” Arcane pattern-making and cutting methods apply, Carey says, when it comes to Huntsman making jackets that don’t ride upwards in an unsightly fashion when the wearer cocks a gun and raises it to his shoulder. 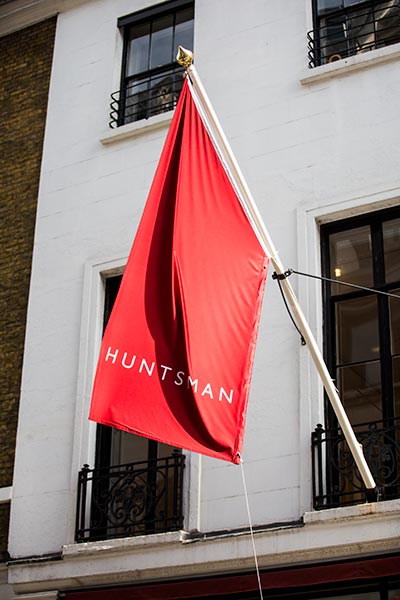 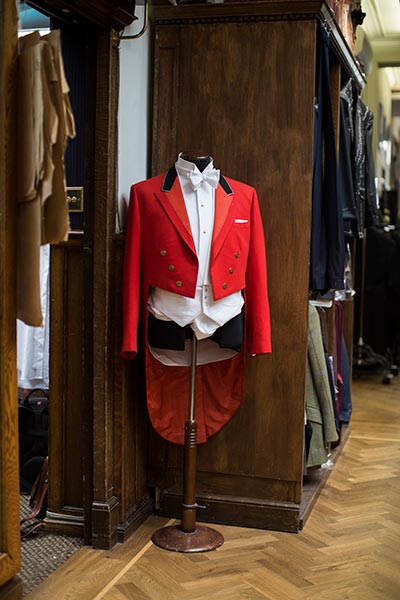 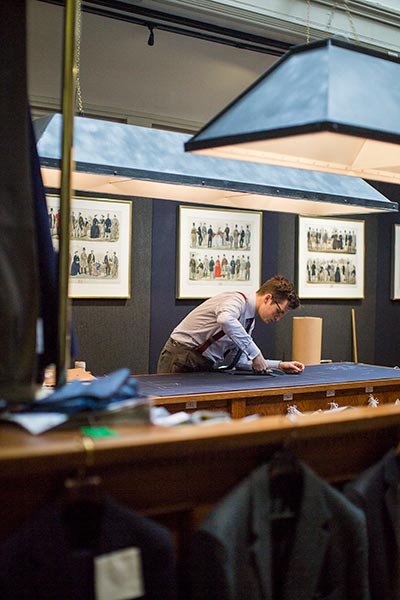 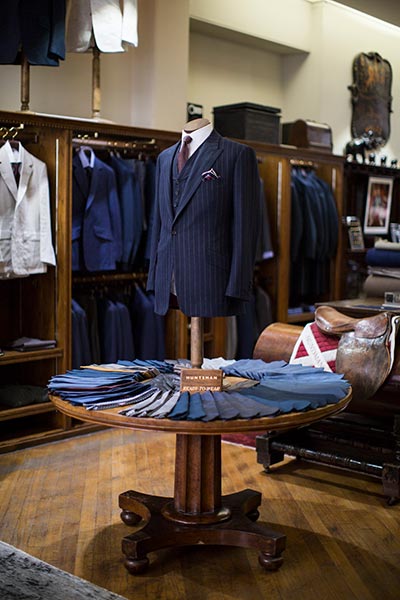 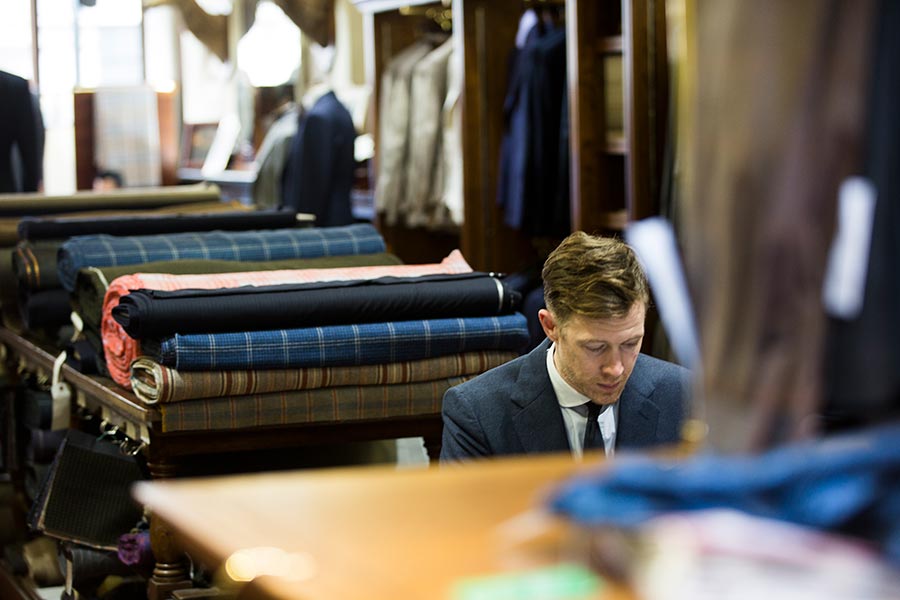 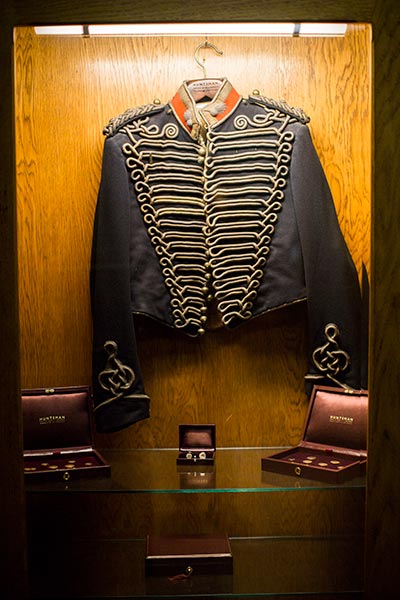 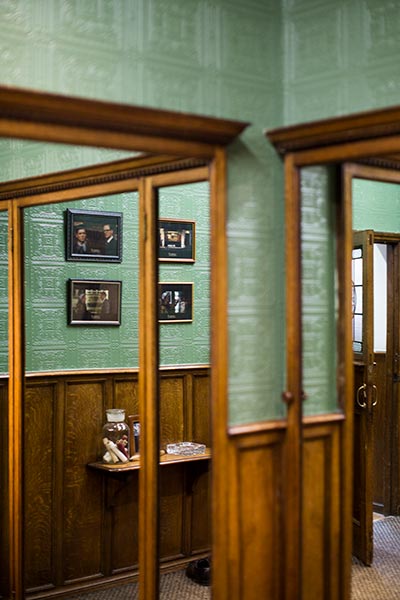 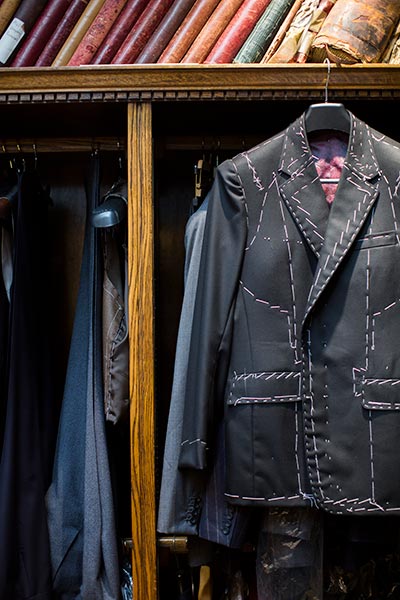 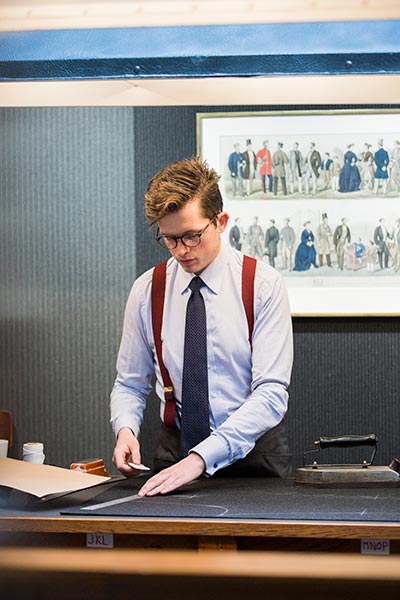 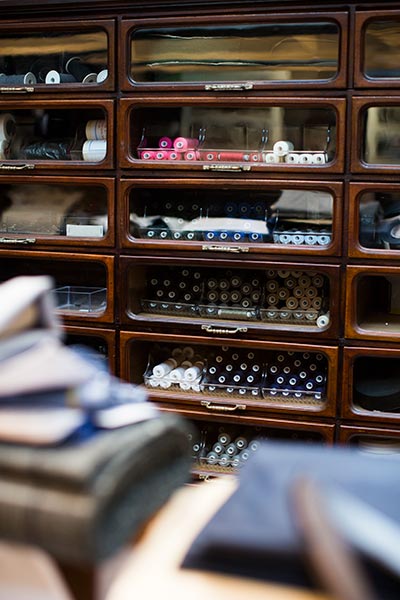 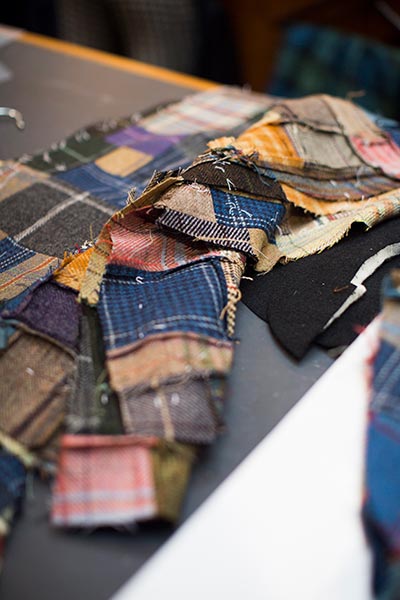 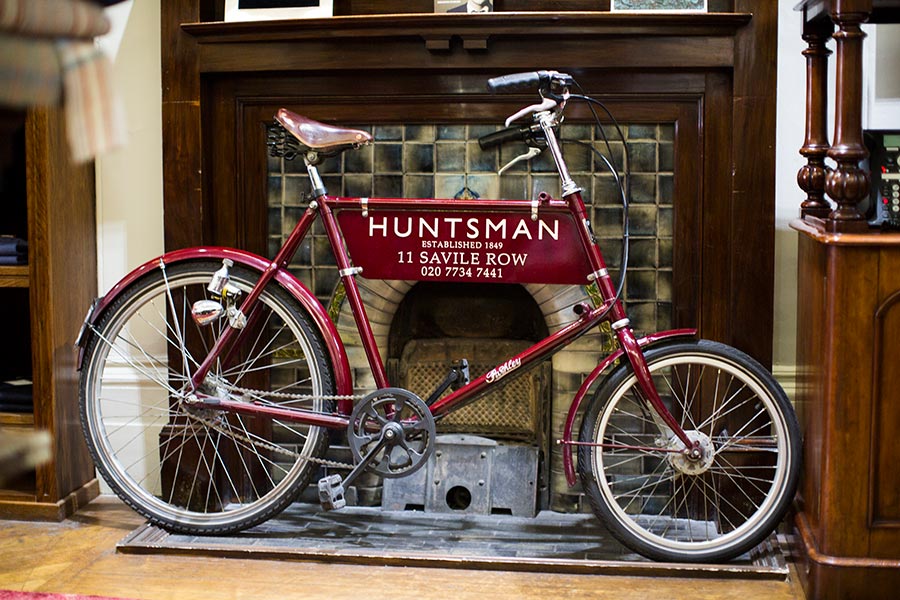 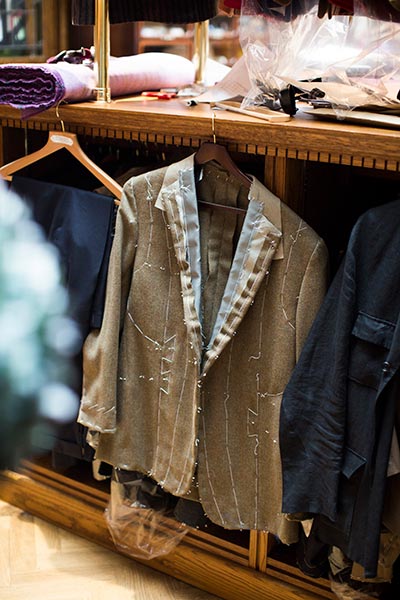 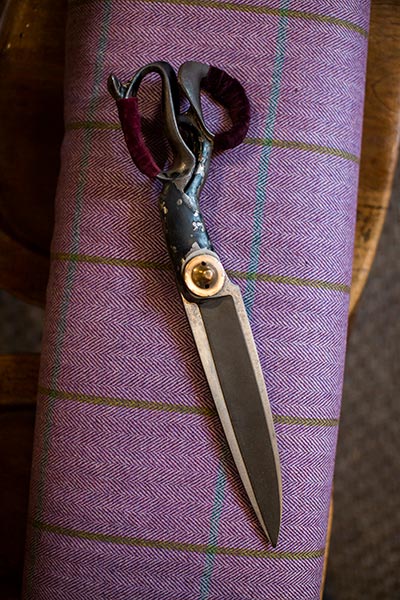 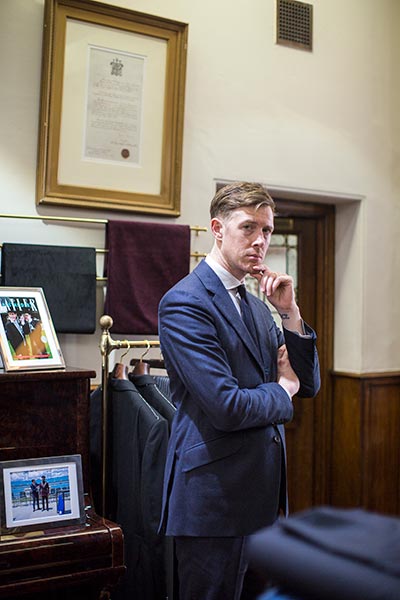 It’s such technical prowess, along with the inherent romance of garments being handcrafted in the UK (on the premises, in the case of Huntsman’s bespoke orders), that is currently making this house a huge hit in Asia, according to Robert Bailey, a Senior Cutter who looks after the trunk shows there and typically spends about four months a year in the region. “People there are really well educated about tailoring, and know about the Huntsman silhouette, but we have to vary it slightly,” he explains. “It’s a fractionally flatter figure, so they go for more shape on the side of the silhouette as oppose to the front and the back.”

Another draw for discerning bespoke buffs is the vast number of exclusive, often markedly unusual fabrics available. “We’ve been working with the Islay woollen mill in the Hebrides since 1983,” explains Carey, “and it’s a case of ‘the bolder the better’ with designs we make with them. Also, in 2007 Anthony Peck, Gregory’s son, was cleaning out his father’s estate and gave us over 160 garments, made by Huntsman from the early 60s right through to the 2000s, which gave us access to all these amazing old, forgotten house checks. There was one tweed jacket with a particularly distinct, unusual pattern that we all now call “The Peck Check”.

“A gentleman’s suit has not changed that much in the last 100 years, but the Huntsman cut has been refined, purified, over the years by each new generation of cutters.”

Perhaps the core ingredient of Huntsman’s hefty kudos, though, is the glossy names found in its archives. The jazz-era client list - The Prince of Wales (later Edward VIII), the Duke of Kent, Lord Charles Cavendish, Viscount Churchill, Rudolph Valentino, Ivor Novello – was followed by a strengthening of the house’s bond with Hollywood (think Laurence Olivier, Clark Gable and President-to-be Ronald Reagan). Much more recently, any notion of the house’s links with Hollywood were a thing of the past was dispelled in 2013, when Huntsman turned out to be the inspiration behind Hollywood spy thriller Kingsman: The Secret Service with Colin Firth and Samuel L Jackson, Director Matthew Vaughn being a loyal customer since he was 18.

Is the era-spanning celebrity factor an essential part of Huntsman’s identity and appeal? “It’s super-important, because everyone wants to dress like people they find aspirational and elegant,” says Pierre Lagrange, who purchased the house in 2013 and is currently Chairman of the Savile Row Bespoke Association. “Style icons are normally from the generation above, and yet everything improves. A gentleman’s suit has not changed that much in the last 100 years, but the Huntsman cut has been refined, purified, over the years by each new generation of cutters.” If standing on the strong, elegantly contoured shoulders of giants can create something as elegant as the contemporary Huntsman silhouette, then long may it continue.