The classic pinstripe made a spectacular return to form in the fall/winter 2016 collections, but as Georgina Safe notes, it is this season the domain of women instead.

The pinstripe suit is a sartorial classic. Made iconic by men including Cary Grant and former U.K. Prime Minister Winston Churchill, the wool pinstripe suit is synonymous with 1940s Italian mobsters and 1980s Wall Street masters of the universe, and is a defining feature of Britain’s Savile Row. Although nobody seems to know the exact origins of the pinstripe suit, one theory is that it came about in the 19th century in London when striped trousers were worn in the city with a morning suit, and each bank identified itself with a different type of stripe. Another theory is that pinstriping originated in the 1920s as a flashy, fashionable choice for dandies inspired by boating suits of the 1890s. 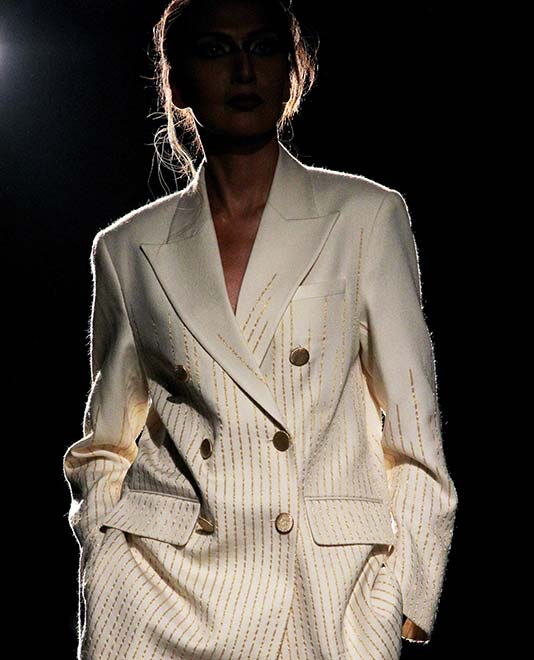 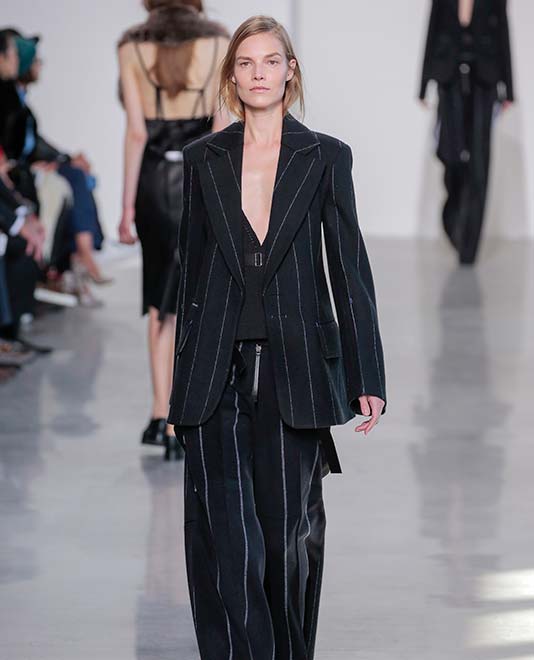 Either way, the pinstripe suit has evolved to denote power, prestige and discerning taste, and is an essential item in the wardrobe of any well-dressed man. But while traditionally the preserve of men – just look at vintage photographs of Fred Astaire and Clark Gable to appreciate its beauty – the wool pinstripe suit has been reappropriated and reimagined for women in the recent fall/winter 2016 collections. Pinstripe suits were shown on countless runways as a celebration of female empowerment and a contemporary interpretation of a wardrobe icon.

“Pinstripe suits were shown on countless runways as a celebration of female empowerment and a contemporary interpretation of a wardrobe icon.”

Italian outerwear brand MaxMara looked to the 1920s Bauhaus and female artists, filmmakers and designers who were at the centre of the movement for its intelligent riff on free-thinking Constructivists, Dadaists and Modernists. Pinstripe and chalk stripes were everywhere on silhouettes that varied from long and slim to boxy and oversized as part of the collection entitled Kinetic Energy, which comprised exceedingly well-cut pant suits for women of all ages. Narrow overcoats were worn with charcoal grey chalk-striped pants, while leather panels and zips added interest to a slim-cut navy pinstripe suit jacket worn with matching wide leg trousers. An oversized double-breasted pinstripe suit had a futuristic air when worn with long leather gloves, and silvered surfaces and sequins added a contemporary shine to MaxMara’s signature wool coats, as part of a confident and accomplished statement by the Italian powerhouse. 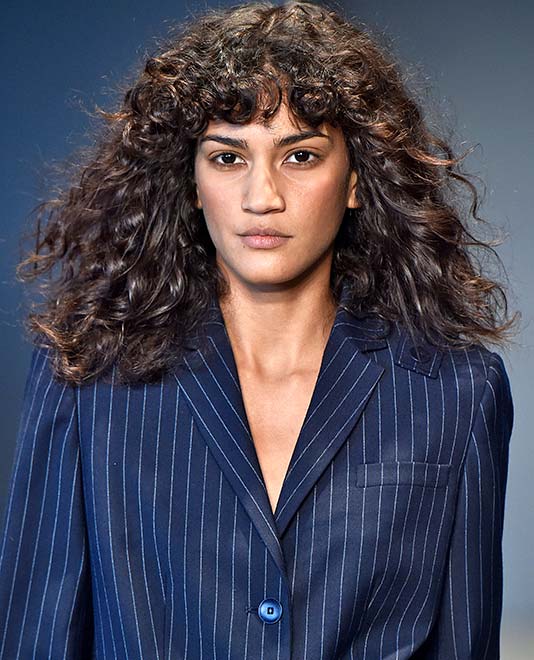 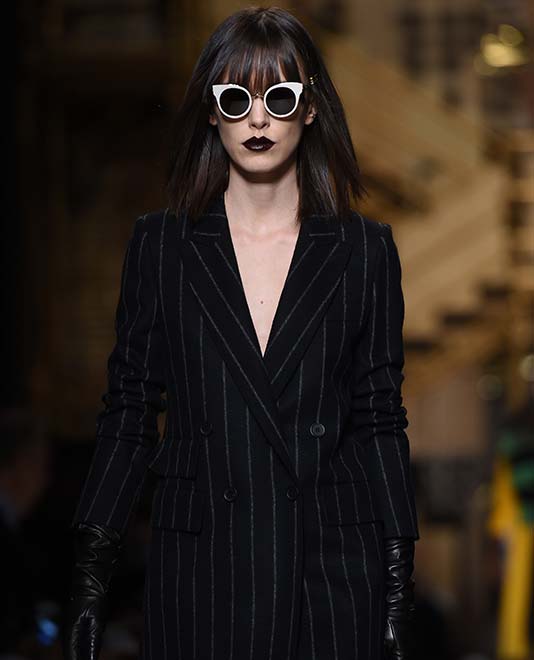 As a consummate minimalist, Calvin Klein Collection’s artistic director Francisco Costa knows the power of an impeccably-cut suit over all else. Masculine, elemental and sharp, the silk wool suiting on Costa’s fall/winter runway came in slightly oversized proportions featuring subtle chalk stripes. It was worn over plunging black camisoles with suspender straps and leather belts for a subversive bondage-style effect, yet with a shell top or blouse would be equally appropriate for the boardroom. Costa employed deconstruction techniques that channelled the Japanese avant-garde to create pieced-together tailoring traced in raw tacked top stitching that melded minimalism with a slightly gothic attitude.

“The pinstripe suit has evolved to denote power, prestige and discerning taste.”

Sies Marjan is one of the new names to know, generating plenty of buzz from fashion insiders for designer Sander Lak’s debut collection at New York Fashion Week in February. Inspired by the cool girls Lak remembers admiring back in the 90s, the former creative director of Dries Van Noten effortlessly mixed high and low elements, such as combining a cargo skirt with intricate embroidery and sending out sweatshirt tops with cascading asymmetrical ruffles. Pinstripe wool suiting conveyed the same sense of ease as Lak’s separates and slip dresses, including a breezy mid-length pinstripe skirt slit to the thigh and worn with a loose blouson-style button-through suit jacket layered over a candy striped silk top. An ankle-length double-breasted wool pinstripe coat featured black leather pockets and a narrow, elongated silhouette, while paper-bag style wide leg pinstripe trousers were knotted nonchalantly at the waist and worn with an untucked oversize shirt. 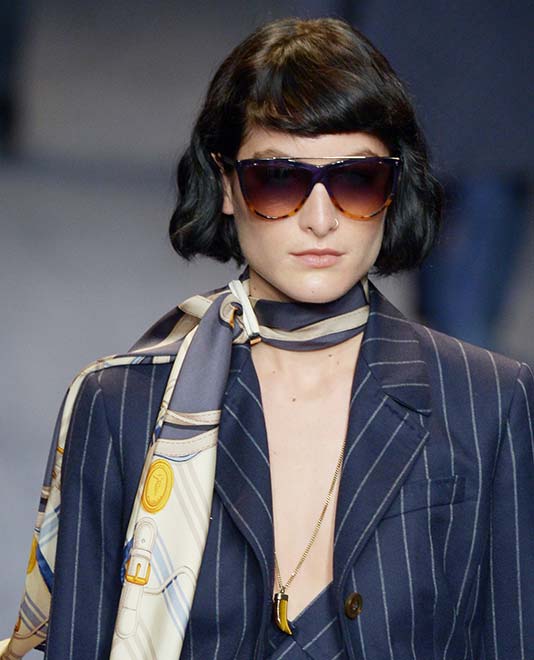 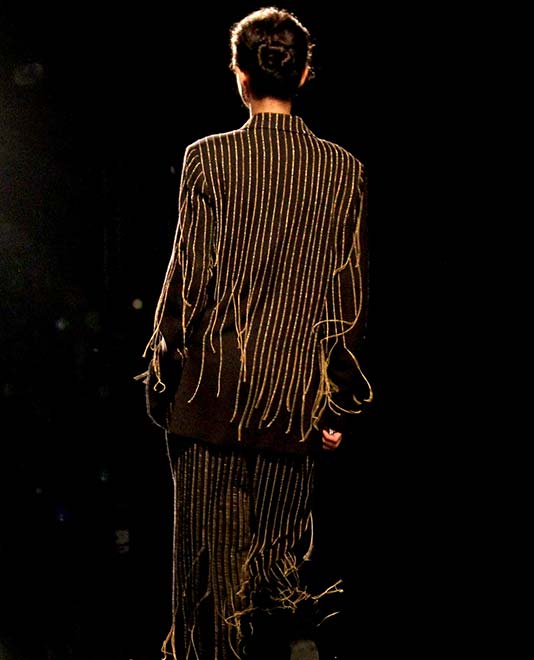 In the fall/winter 2016 collection of Rajesh Pratap Singh, gold metal yarn is handwoven with Merino wool to mimic the Ikat technique. & Trussardi accessorises its suits with sixties-style scarves and glasses for fall/winter 2016.

A more classic riff on the pinstripe suit was on show at Tibi, where neat-as-a-pin single-breasted cropped wool jackets were teamed with voluminous pinstripe trousers in a chic and highly wearable play on proportion. Military dressing was the starting point for the collection, which opened with a tall officer’s coat and cropped bomber before seguing into plenty of pieces fit for the urban battlefield. Coats and blazers were adorned with military-style gold buttons and pinstripe trousers were teamed with flat white leather trainers for city soldiers on the march.

“Whether your personal style is Annie Hall, city soldier, Dadaist or 90s cool girl, off the runway, the beauty of the pinstripe suit is its versatility.”

Whether your personal style is Annie Hall, city soldier, Dadaist or 90s cool girl, off the runway, the beauty of the pinstripe suit is its versatility. Double-breasted or single-breasted, with a waistcoat or without, the choices begin with selecting the suit itself. Take your inspiration from Marlene Dietrich or Madonna in her Express Yourself video clip in an oversize pinstripe suit with a monocle, and opt for a bold double breasted expression of power and confidence, or try a slim-fit single-breasted version for a subtler spin on stripes. Wear either suit as an ensemble, or pick your pieces apart for extra wardrobe mileage. Take a casual approach to a wool pinstripe suit with a soft cotton T-shirt or tank underneath and team it with a pair of white trainers or shiny black slides for slouchy nonchalance. Dress it up for the office with an ivory silk blouse or fine gauge wool shell worn with a fine gold necklace and discreet earrings. But pinstripe suiting really comes into its own in the evening, as an unexpected yet utterly mesmerising statement of originality and style. All you need is a pair of heels, a silk camisole and an attitude that for you, anything is possible.