The Evolution Of Teatum Jones

As the beginning of the seasonal fashion week calendar, New York Fashion Week is where the big trends are established and editors, buyers and – with see-now buy-now collections becoming ever popular – the public, too, plan what to expect for the months ahead. For spring 2017, designers found new ways of working with wool, such as in tech-coated iterations, to offer knitwear and tailoring that felt entirely fresh. We report on the season from the front row.

At its core, fashion relies on function to succeed, and while fantasy plays a large role in the creative nature of fashion, a designer must ultimately be able to dress their customer in pieces that are at once comfortable and flattering. This season, that concept played out in the significant amount of tailoring that featured in the collections of designers both big-name, such as Michael Kors, and the more emerging, such as Dion Lee.

Yet while tailoring evinces notions of a stuffy corporate wardrobe, the offering here was far more aspirational and, in the case of International Woolmark Prize finalist Dion Lee, sexy, too. Riffing on his penchant cut, and expanding on his newly launched range entitled SUIT, the Australian-born, now New York-based designer showed how innovative blazer and trousers ensembles can be, cutting fine Merino wool into a double-breasted tuxedo with exposed shoulders, and cropping the pants above the ankle, side splits adding flare to the cigarette-thin shape.

Where Jason Wu’s collection opened with a double-breasted Merino wool look, too, he evolved it in his own unique way, extending its length into a coat-dress and finishing it with metallic taffeta pleats and binding, adding a sense of playfulness to the strictly tailored cut. Wu further used wool in his collection, with asymmetrical skirts and bandeau ruffle dresses in navy and flamingo pink delivering the flair for which his collections are much loved. 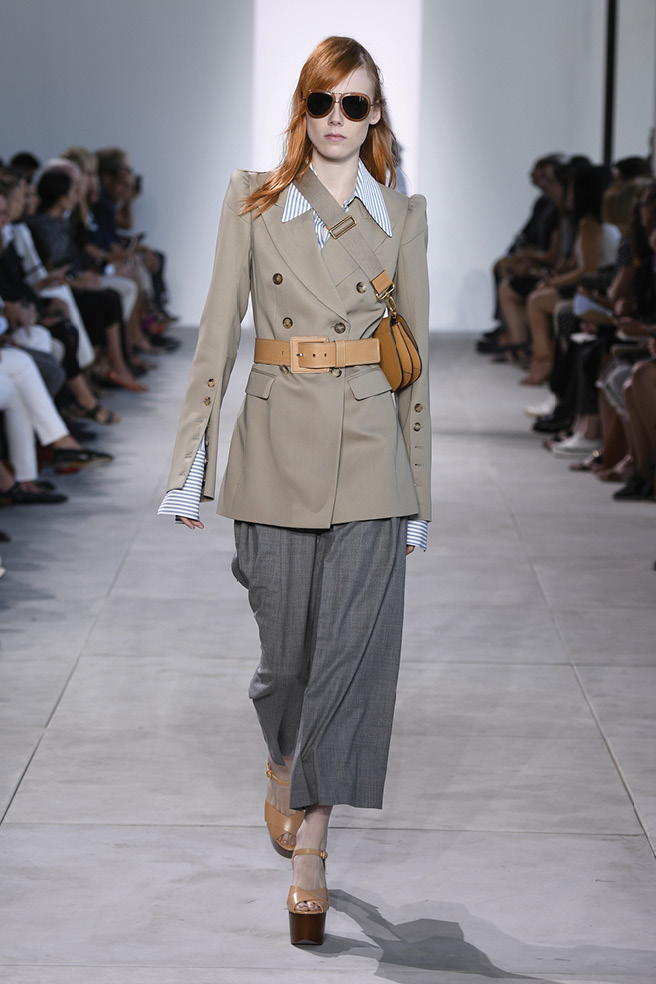 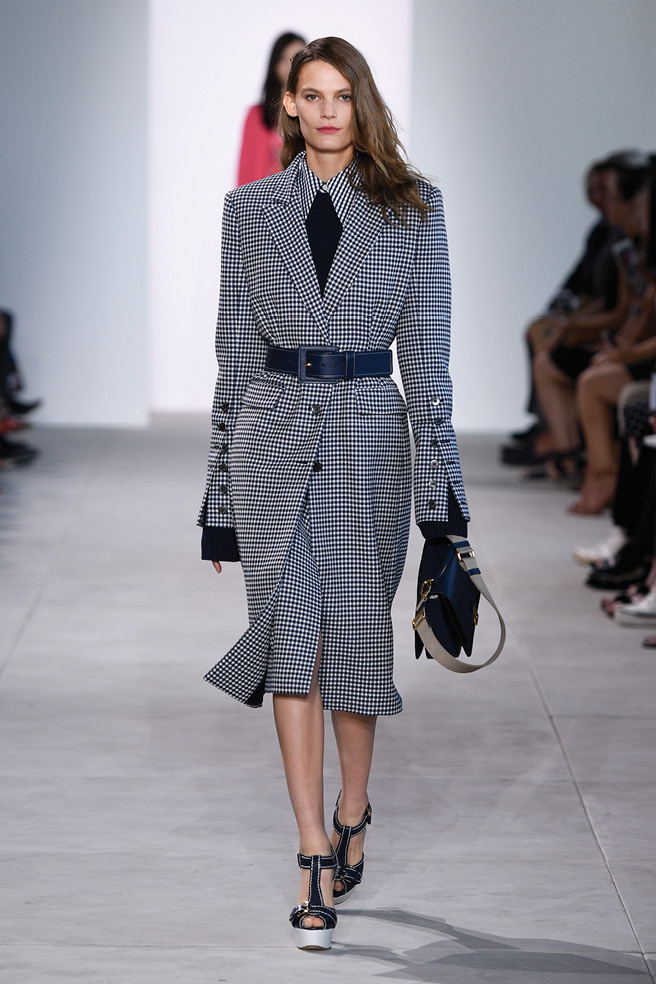 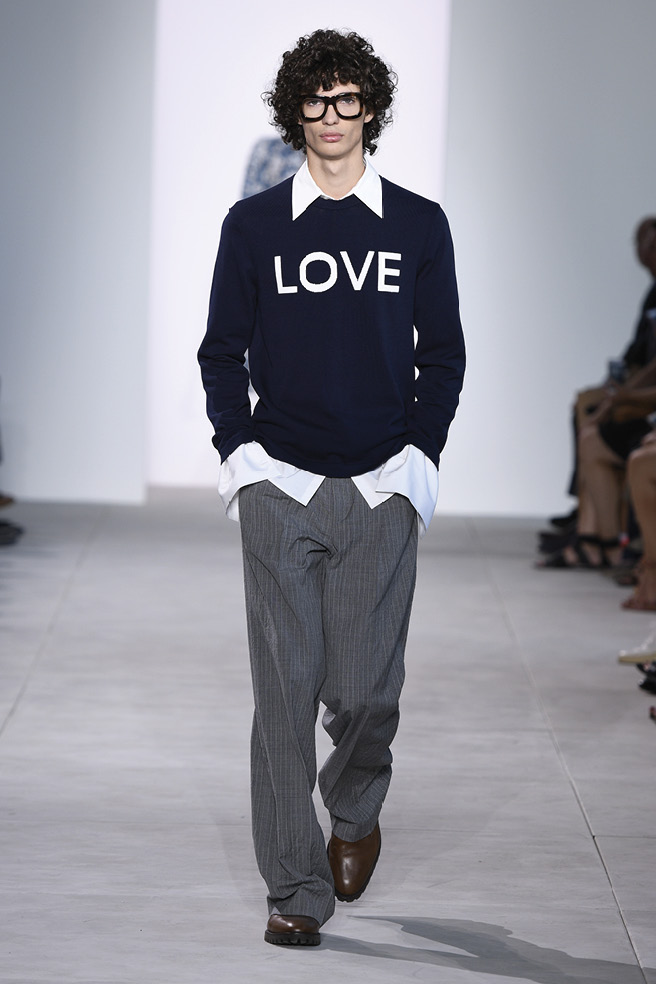 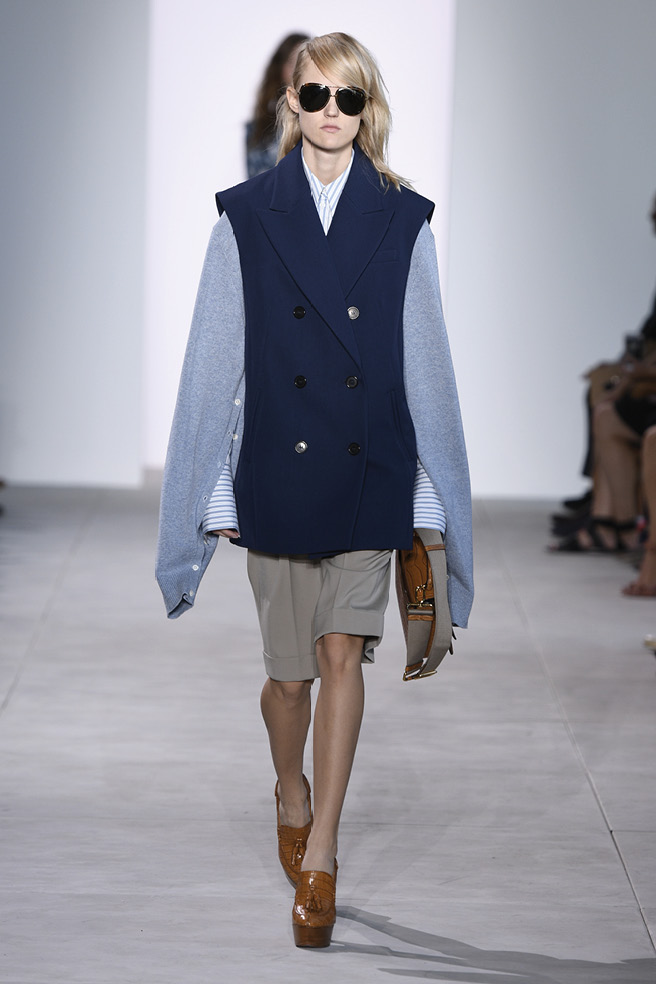 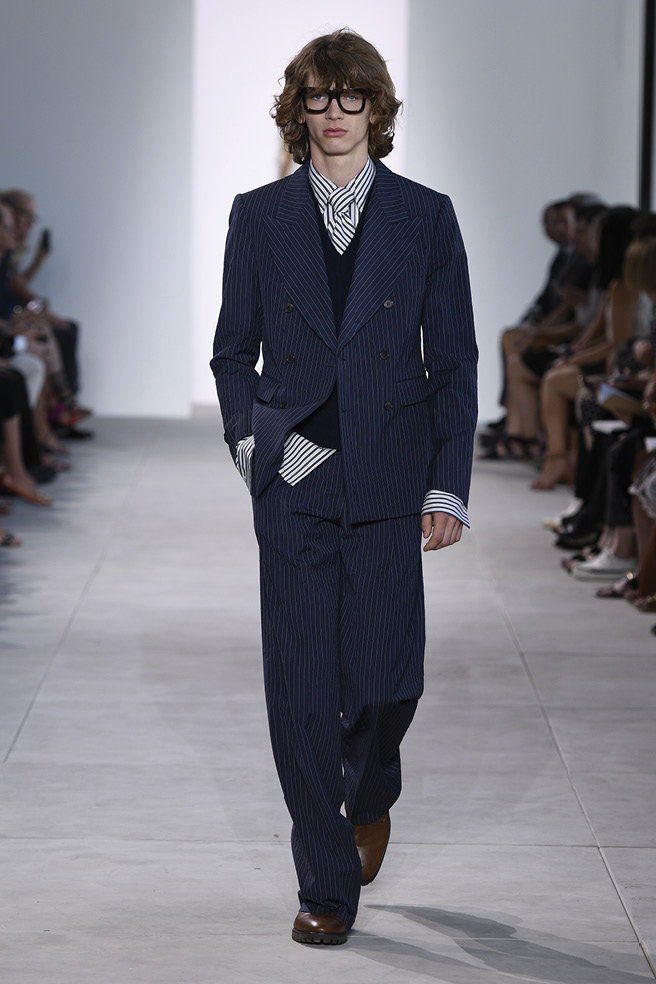 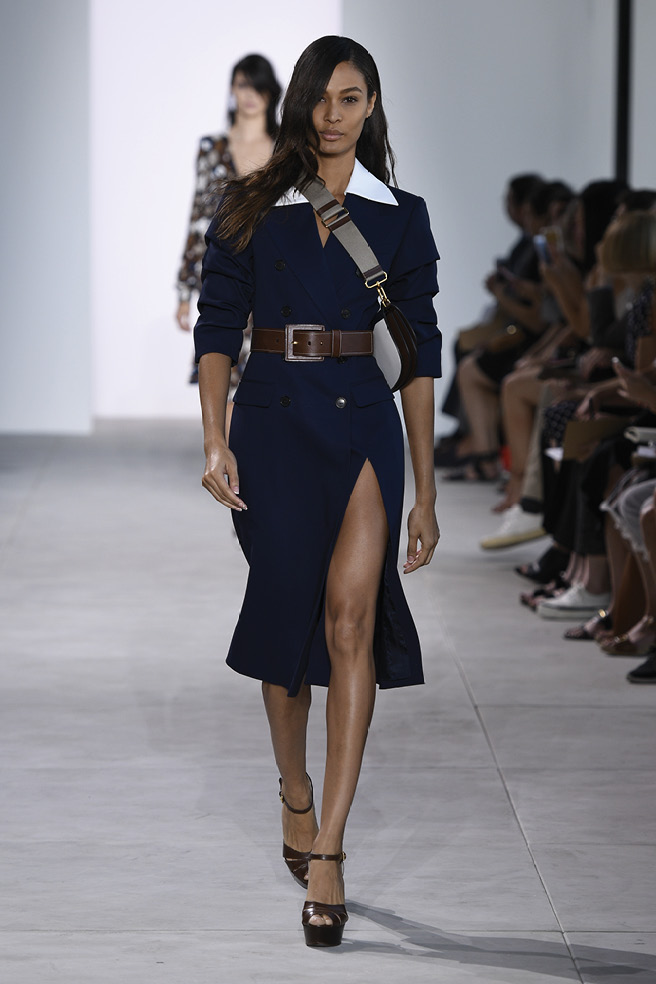 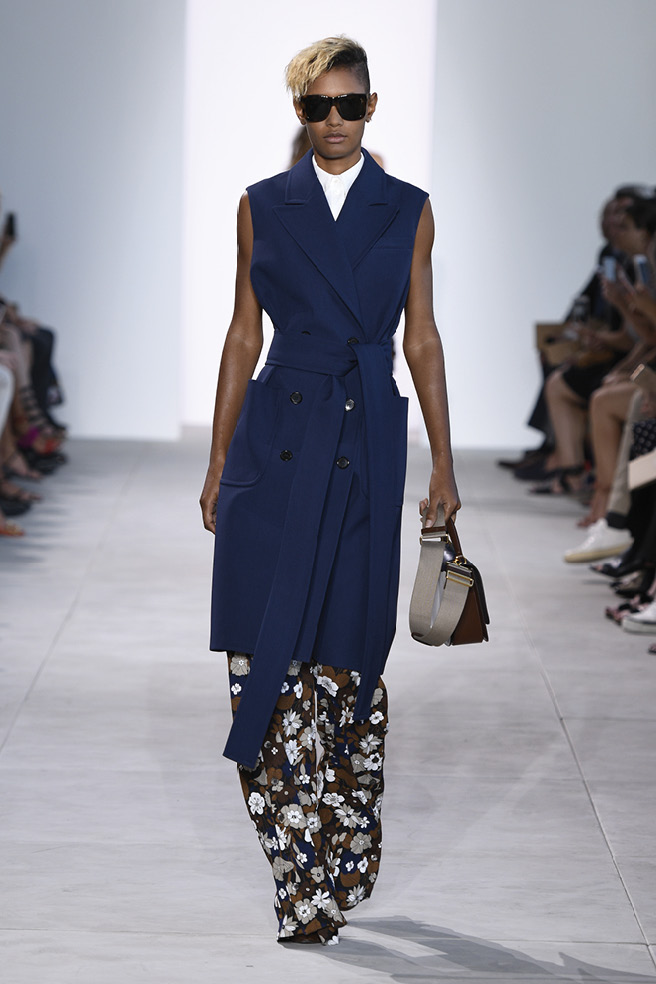 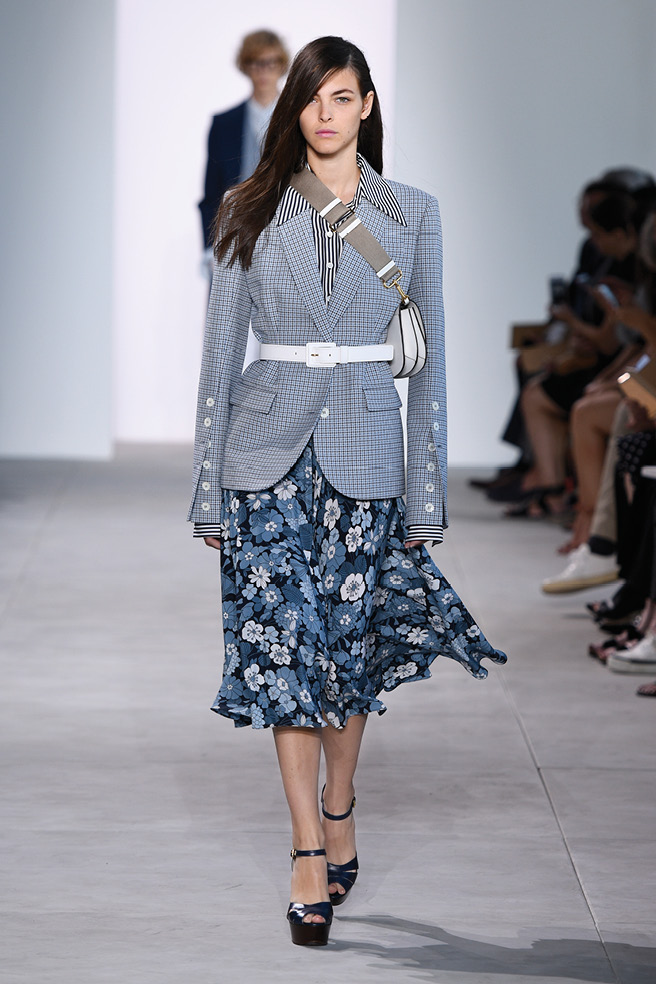 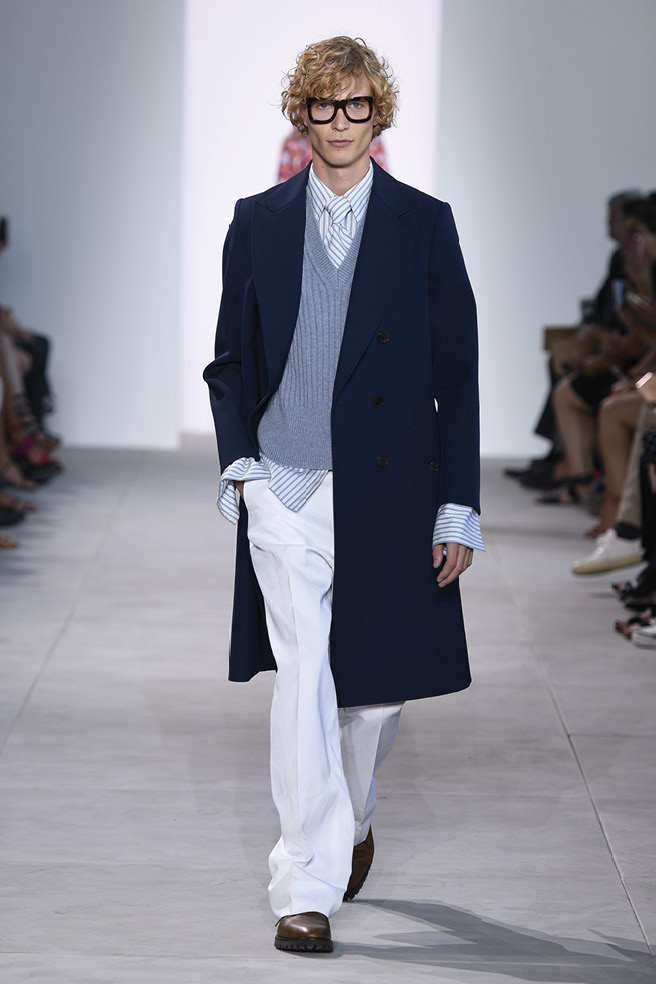 If we can already proclaim the biggest trend of the season, it’s double-breasted suiting, with Michael Kors joining the mix with yet another take on the classic. Celebrating his brand’s 35th anniversary with a standout collection featuring Carolyn Murphy, Kendall Jenner and Bella Hadid, as well as a surprise performance by musician Rufus Wainwright, the designer reaffirmed the hallmarks of American fashion with a collection of women’s looks that nodded to Annie Hall in their proportions and styling, such slouchy wool gabardine overcoats, belted wool-cotton blazers (here with added detail of buttons that extended up the sleeve to the elbow), and sleeveless wool gabardine peacoats, all in a palette of neutrals, such as navy, white, sand and sky blue. Men’s looks, such as navy officer’s wool coats and languid crushed wool double-breasted suiting, completed the narrative. 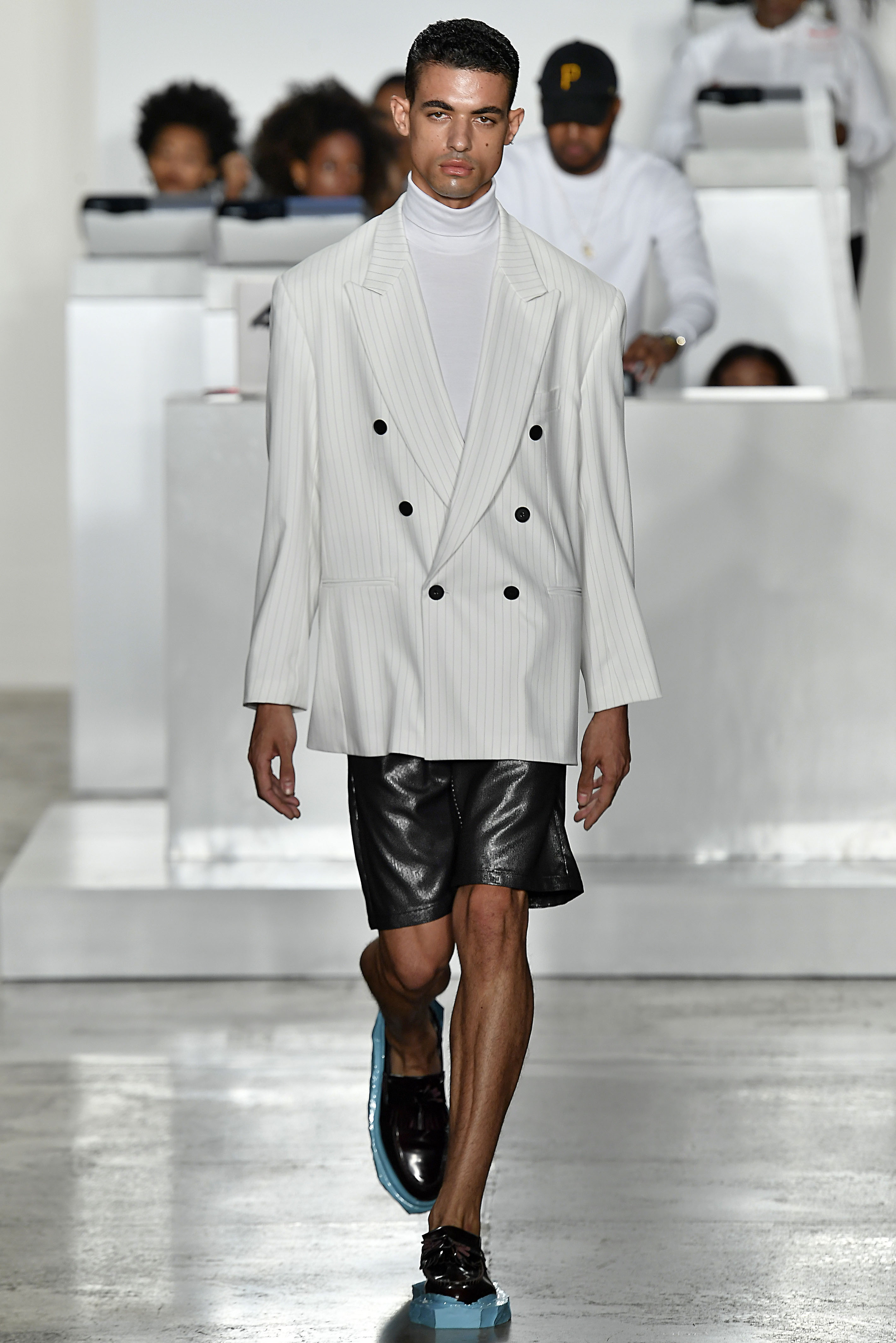 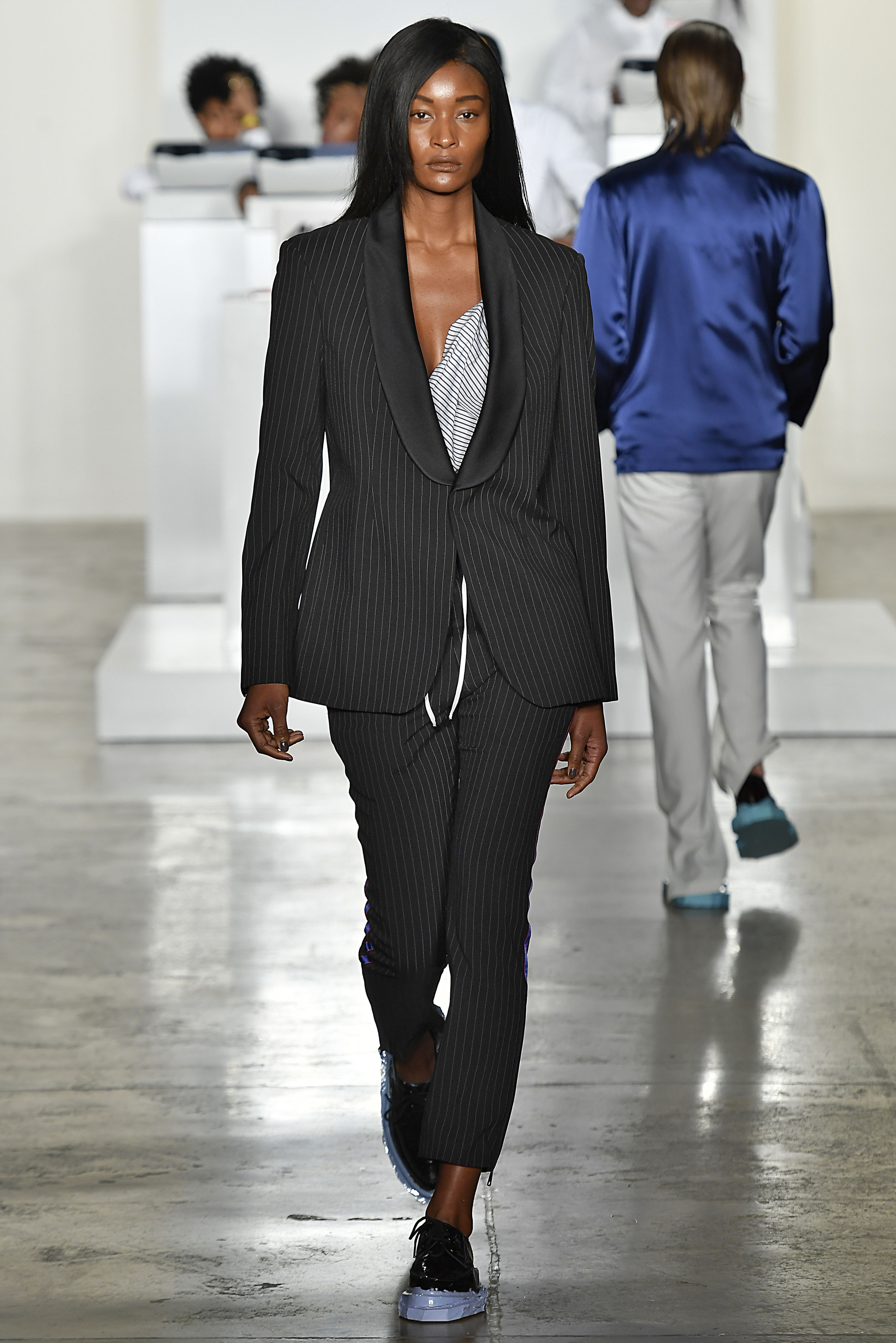 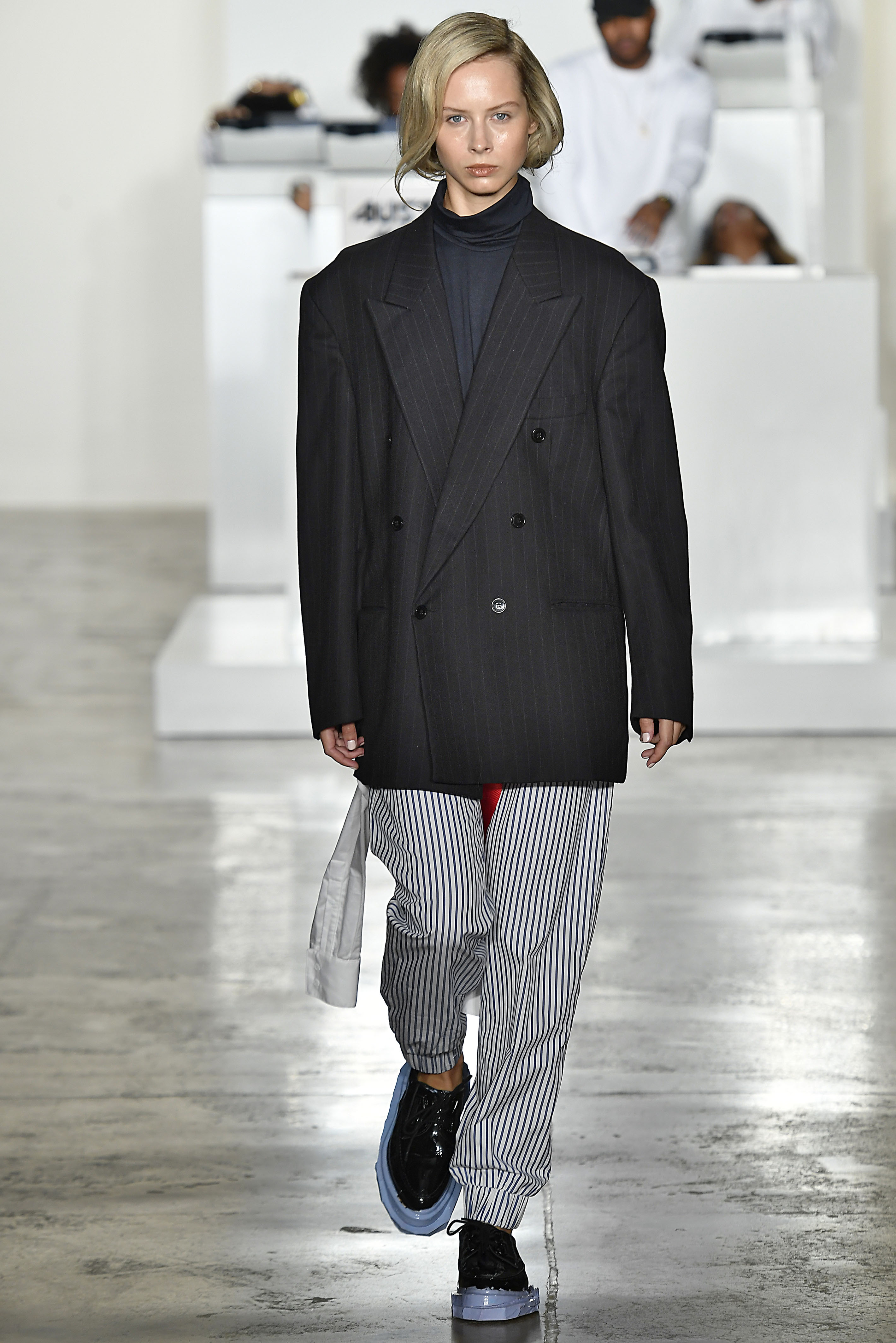 On-the-rise label and recent International Woolmark Prize nominee Pyer Moss explored suiting by subverting its classic shapes, with designer Kerby Jean-Raymond adding an appealing youthfulness in the process. Double-breasted blazers in white and black pinstripe were cut wide and low from the body, grey wool suiting was shrunk so as to appear cropped, the shirt layered beneath billowing out, and the classic wool tuxedo was overhauled with the addition of a nipped waist and sports-inspired trim down the sides of the trousers. 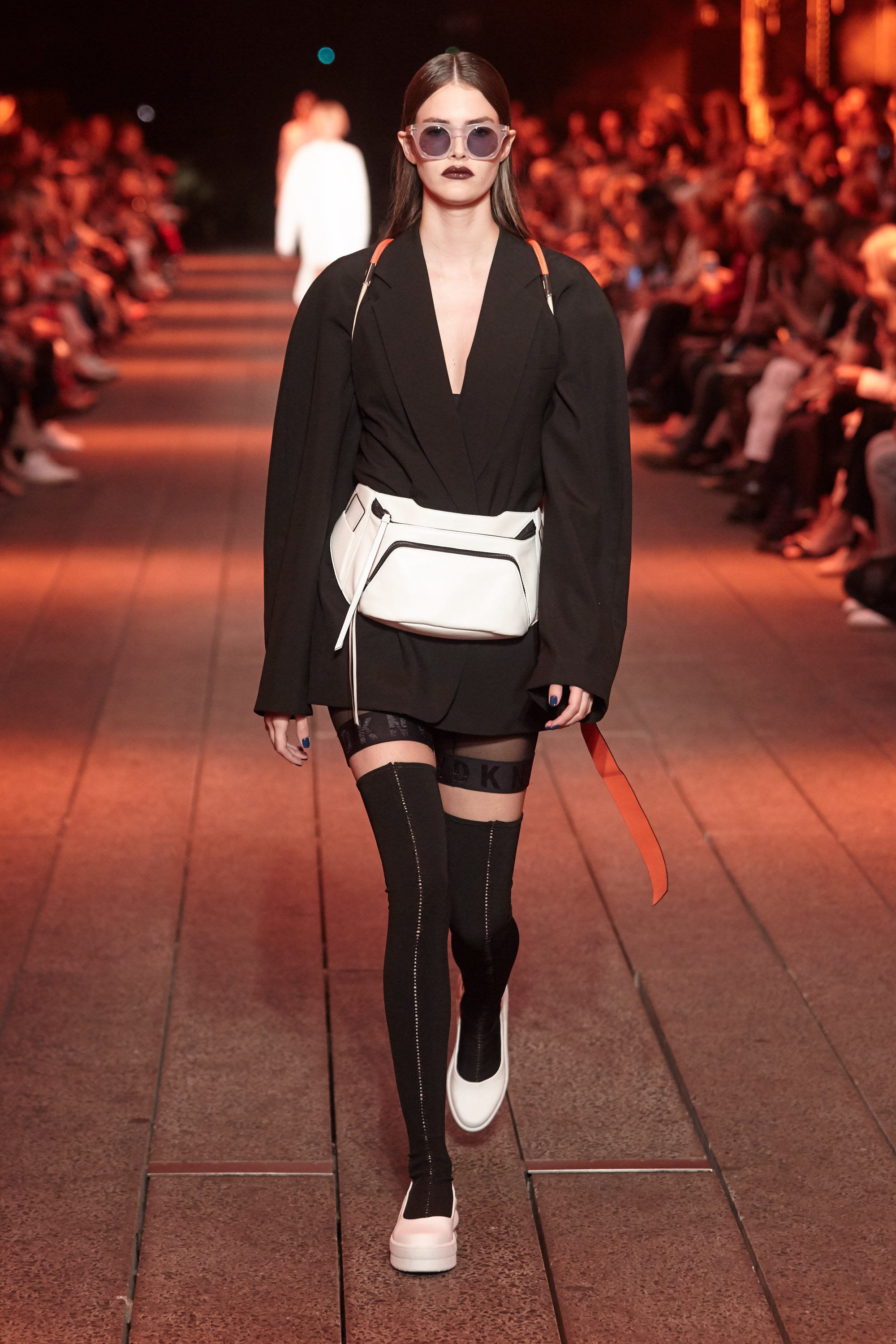 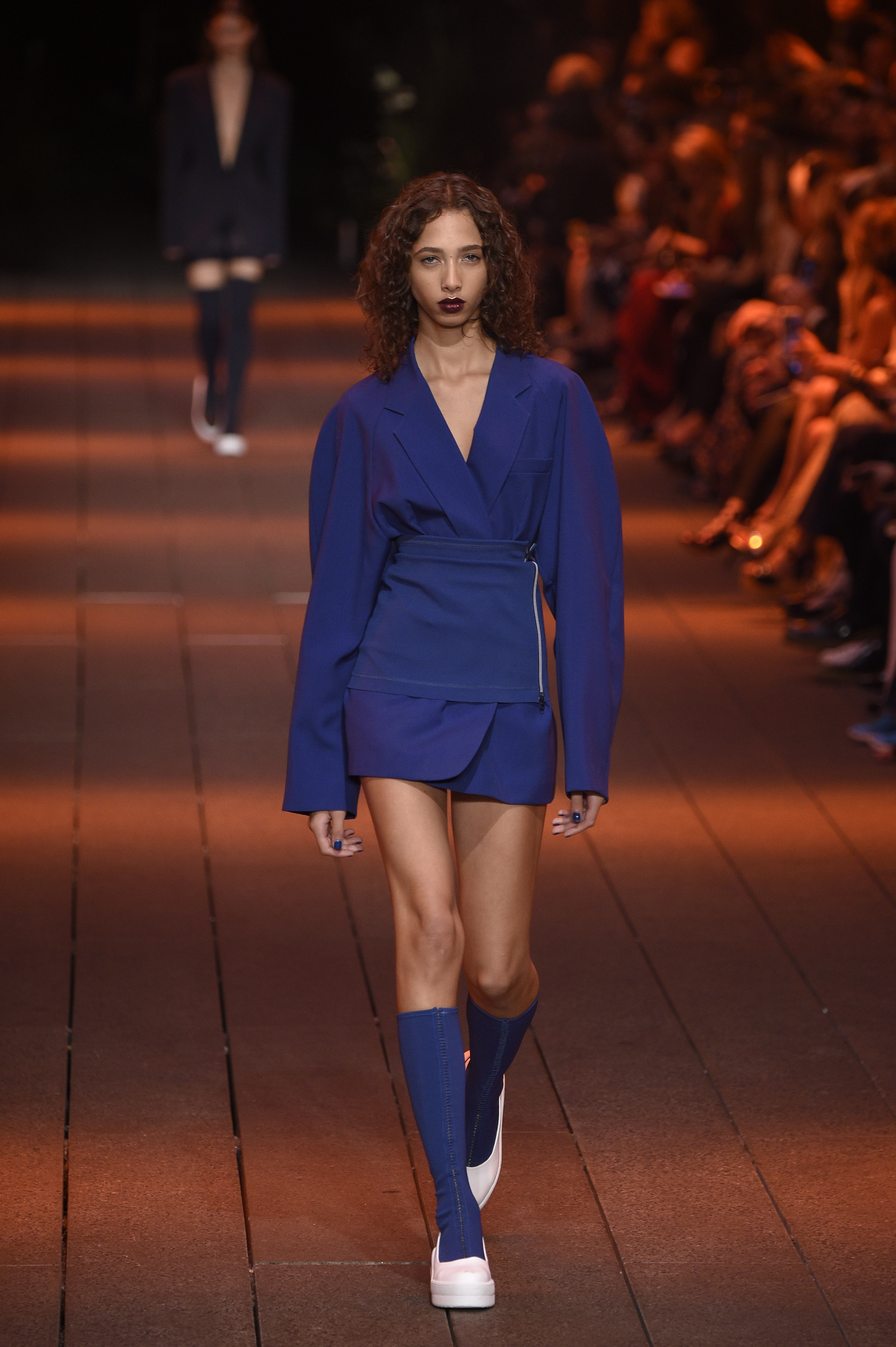 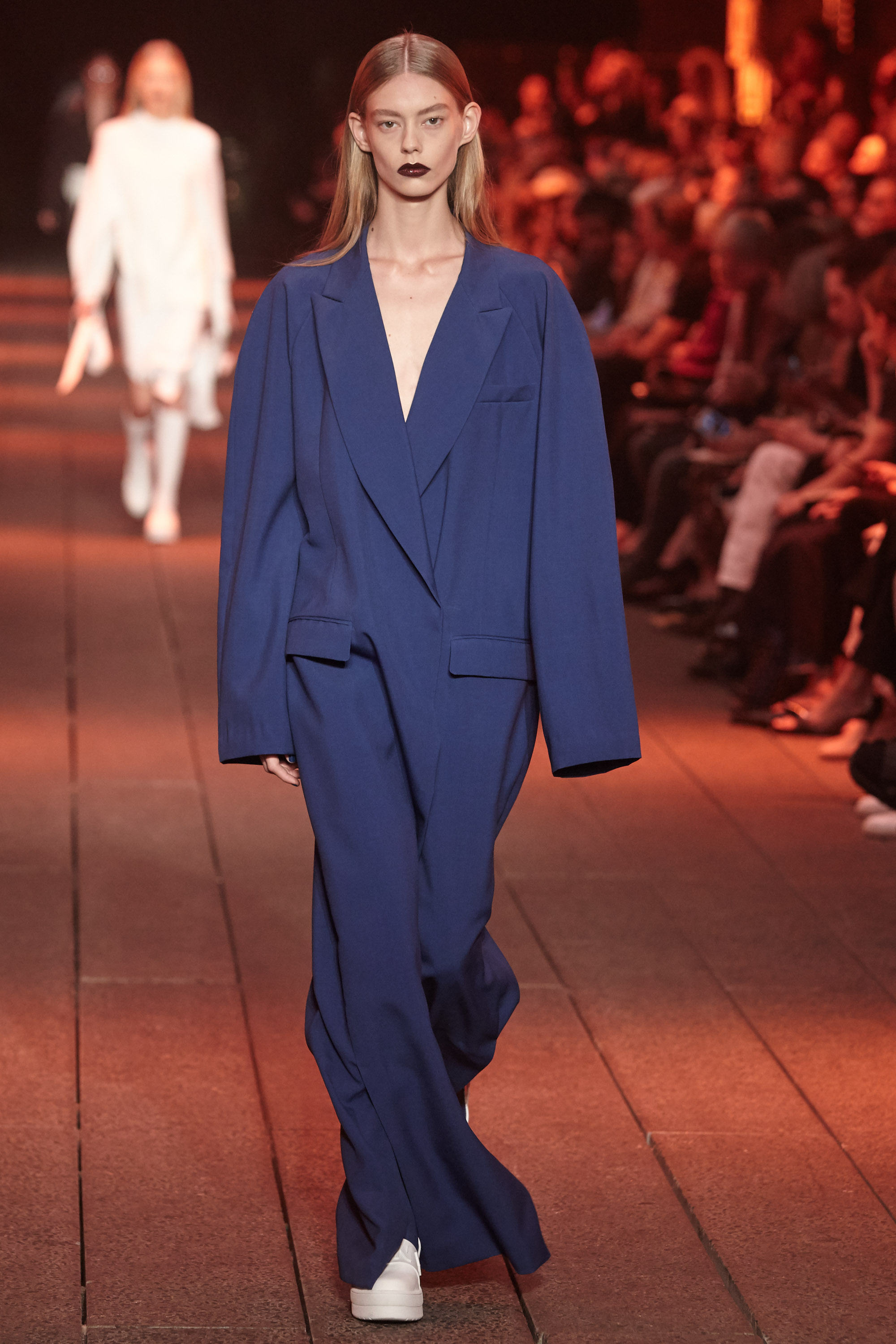 The DKNY girl, via the vision of Public School design duo and former International Woolmark Prize winners Maxwell Osborne and Dao-Yi Chow, is a confident one, leaving the trousers behind altogether, as in the opening looks, in which oversized double-breasted wool suiting in cobalt blue was teamed only with boots and matching nail polish, and fastened around the waist so as to shape the body in sharp lines. The highlights in this collection, staged atop the high line and marking the first with the new designers at the helm, were many, with the pair bringing their streetwear sensibility to the storied New York brand, a diffusion of Donna Karen, such as with slouchy, double-breasted wool jumpsuits and voluminous wool overcoats in vivid orange.

French brand Lacoste showed a similarly sporty collection, but where DKNY took its cues from youth subcultures, it instead looked to its own history for inspiration, channelling the a thirties-via-seventies spirit of louche glamour. That included, for example, terrycloth robes, some belted like a trench coat, wide-legged trousers, and lightweight wool knitwear, such as cropped track pants, oversized cardigans and hooded throwovers. The effect, when shown in a brightly-lit, tree-filled studio, was of a glamorous island getaway. 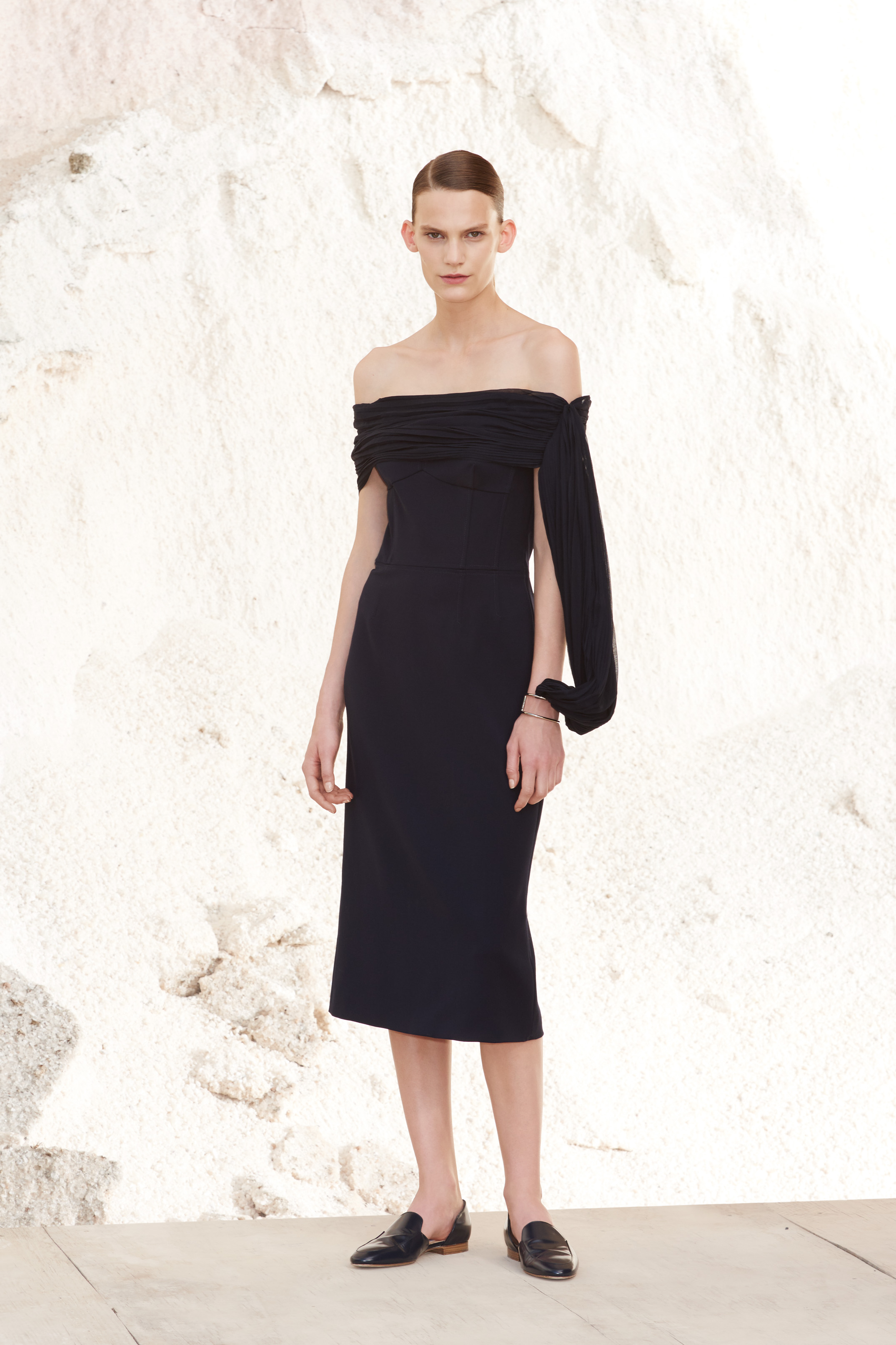 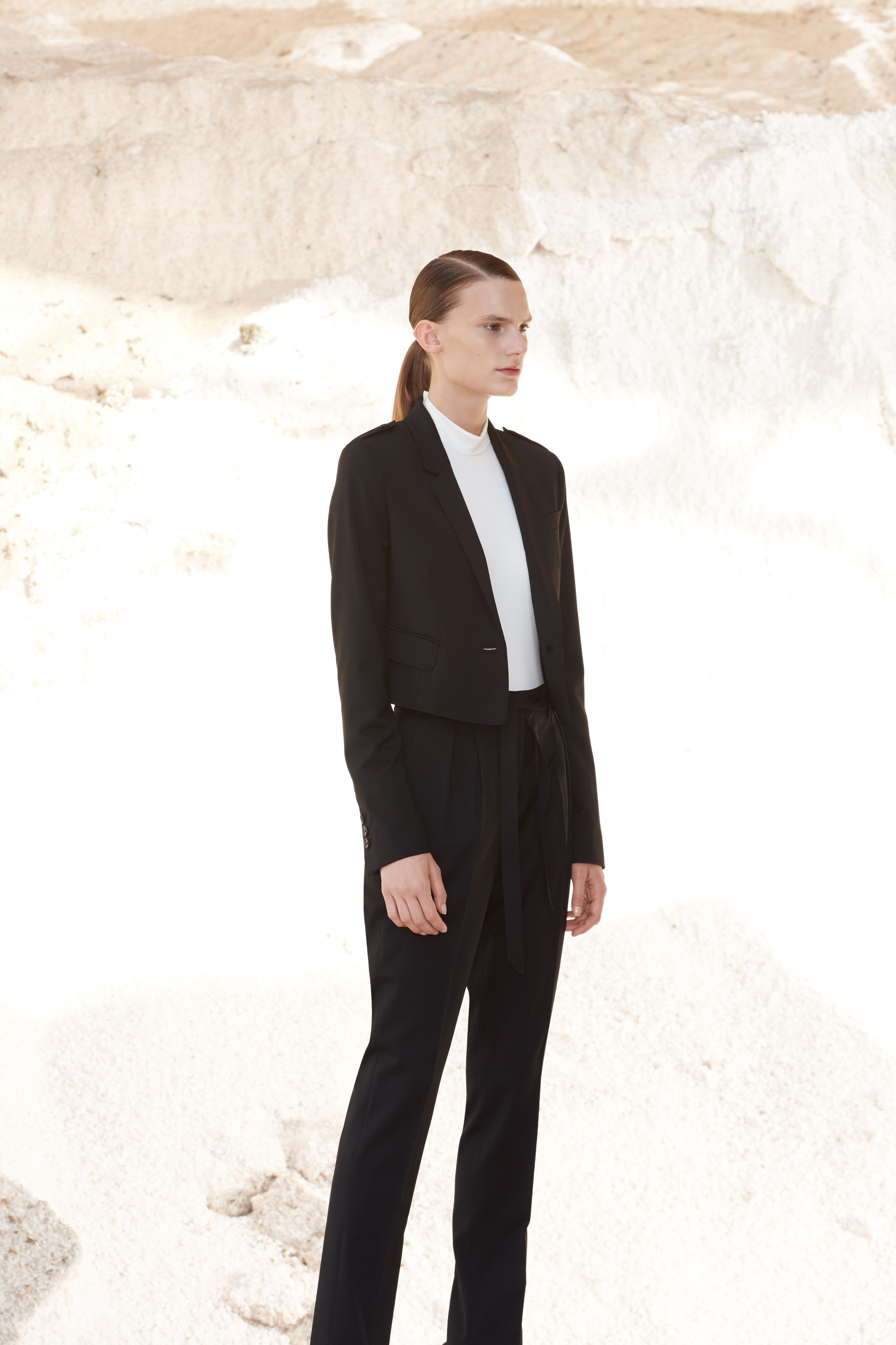 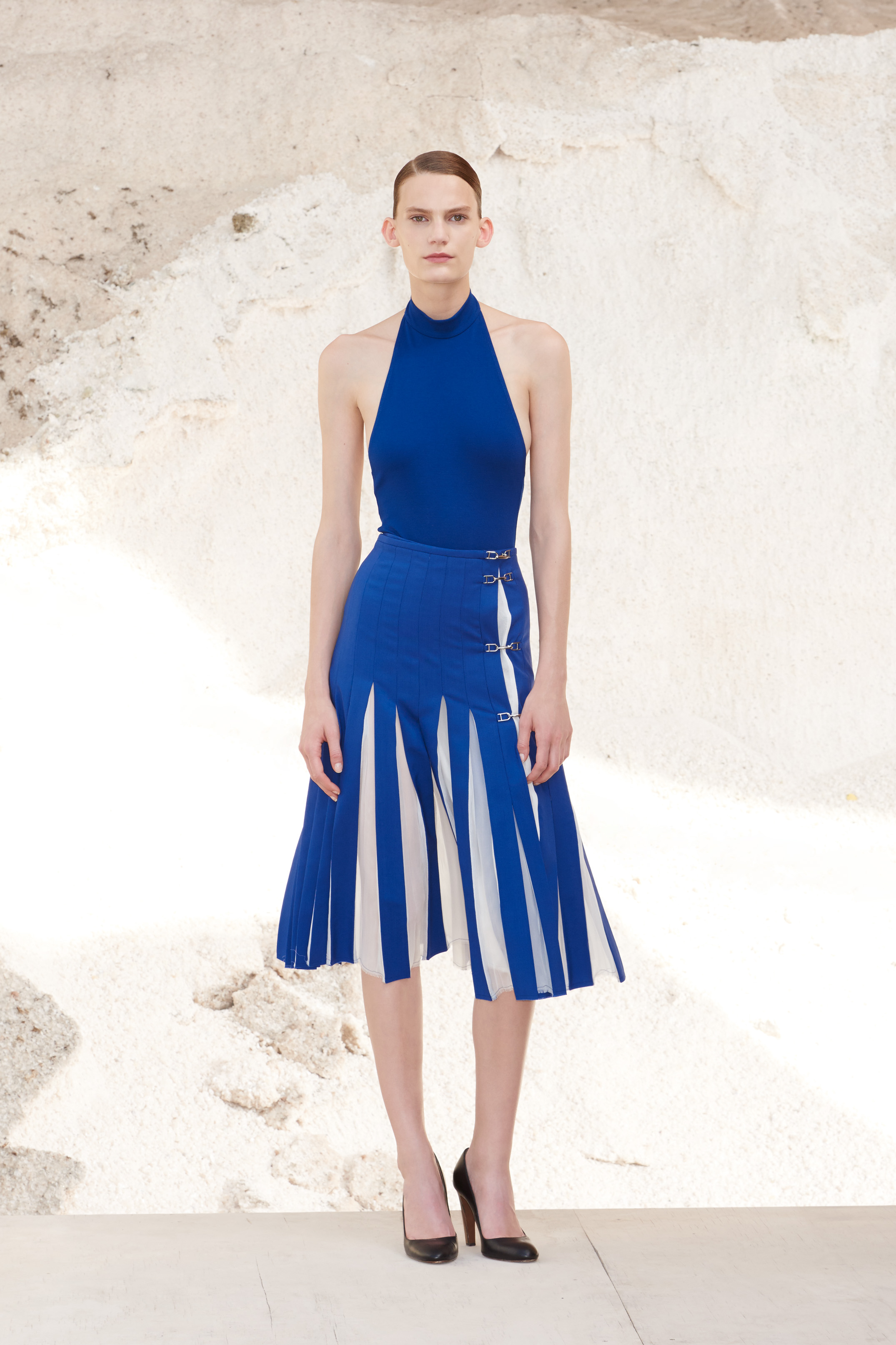 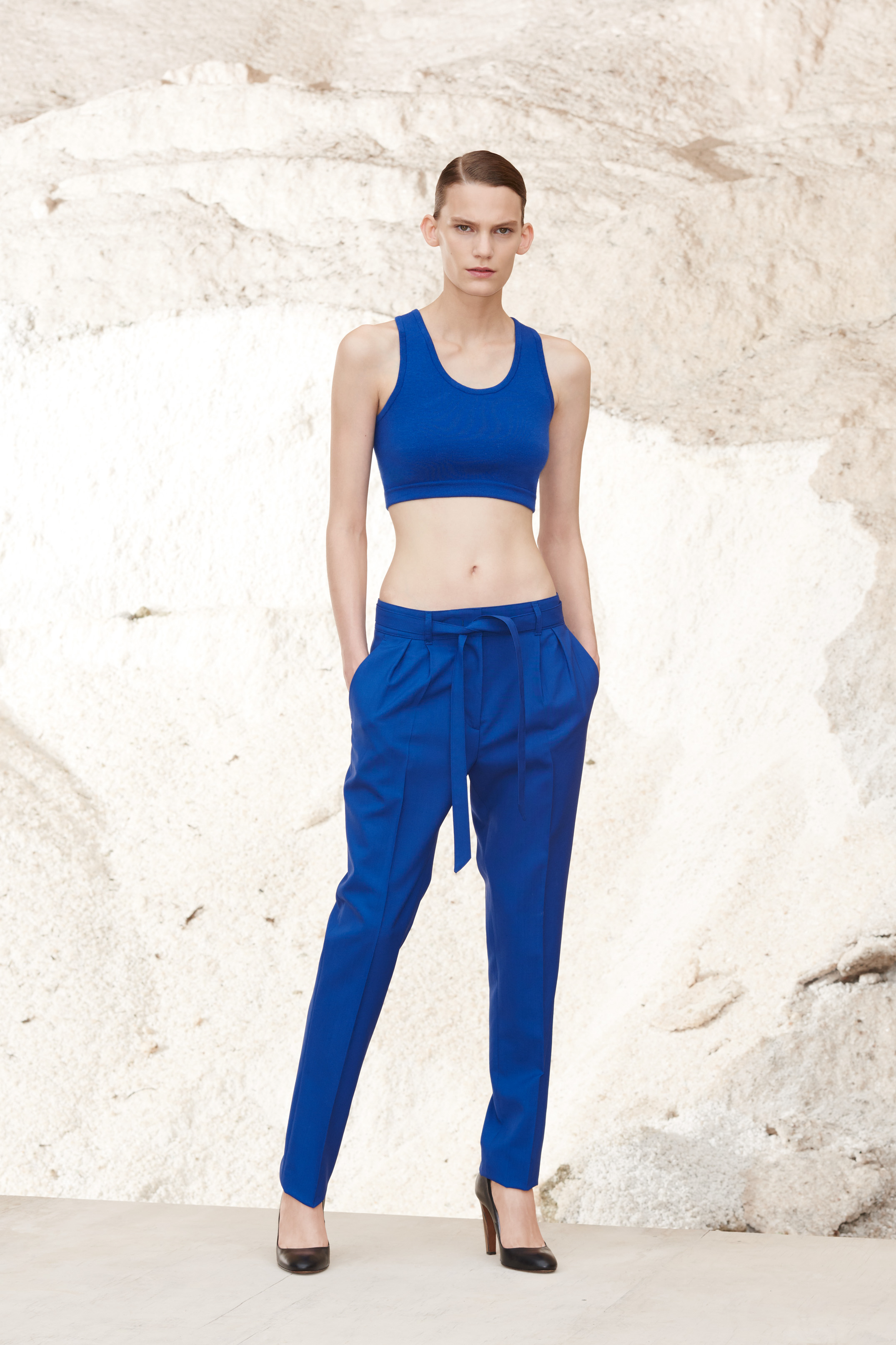