We’ve all seen their work, but few of us realise it. James Bond’s suits from the Pierce Brosnan era onwards; the formal apparel of Team GB in the last Olympics and the England football squad in the last two World Cups; the famous green jackets for the Masters Golf Tournament in Augusta; many of the garments found in the hallowed boutiques of labels including Burberry, Paul Smith, Chanel, Tom Ford, Hermes and Gucci – all of the above have been through some combination of the sophisticated treatments, honed, tweaked and perfected through the ages, of Huddersfield textile finishing company W.T. Johnson: a family-run business, founded in 1910, which takes perfection very seriously indeed.

“Our job is to enhance our customers’ fabric – to clean it, improve its texture, handle and drape, and stabilise it so that the subsequent garment maker can work with it properly,” explains Managing Director Paul Johnson who, along with his brother Dan, is the fourth generation of Johnsons to helm the company. “If we don’t get our bit right the user is left short changed. A fully finished fabric makes the difference between a suit lasting ten years and it lasting three. There are faster and cheaper ways to do what we do, but if you’re a discerning customer you can tell the difference between a piece of fabric that’s been finished quickly and cheaply, and one that’s been done slowly and properly - very easily.”

The machinery used to carry out W.T. Johnson’s aims is as high-tech in performance as it is archaic in appearance. The first imposing piece of apparatus those touring the plant encounter is a scouring dolly which, being encased in a giant barrel made of wooden planks, calls to mind a timber gypsy wagon. Inside it, lengths of fabric are being sluiced in a mixture of natural soap and hot water, and squeezed around rollers made of Ekki, a water-resistant, non-slip African hardwood also used for bridges, decking and construction. The machine – identical, in principle, to those used over 100 years ago - is especially conducive to scouring finer wool fabrics as it does the job slowly and gently (each stretch of cloth undergoes a two-hour session). Next up are the company’s milling , which felt fabric by crushing it between metal slabs in a steaming-hot, watery environment. “It makes the fabric warmer and denser, and softens the contrasts between colours – so designers create patterns with its effects in mind,” explains Technical manager Alan Dolley, who started working here 40 years ago, aged 16. By way of illustration, he holds up a segment of cloth whose tartan pattern has a slightly out-of-focus look, as if reimagined by an impressionist painter.

Johnson describes finishing as “Part art and part science”, and the operators’ task, when it comes to milling, is a striking example of this. Bearing in mind the specific wool content, as dictated by recipes (the fabrics will invariably be a blend of various fleece batches), as well as various different desired outcomes – including “light crush” and “blind flannel” – they must calculate exactly how to programme the machine in order that the desired weight, density and dimensions are achieved, taking into account shrinkage. “We know precisely what fibre will lose in bulk from various processes at various settings,” explains Dolley.

Some of W.T. Johnson’s impressive arsenal of equipment was made on-site by in-house engineers – including the company’s drying machines. These re-soak the fabric evenly before suctioning off the water – counter-intuitive, one might think, but the ream of cloth being sodden forms a vacuum-forming seal, making suction drying more efficient and effective. 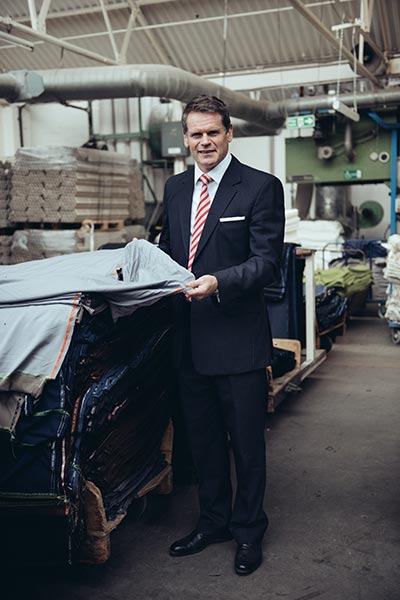 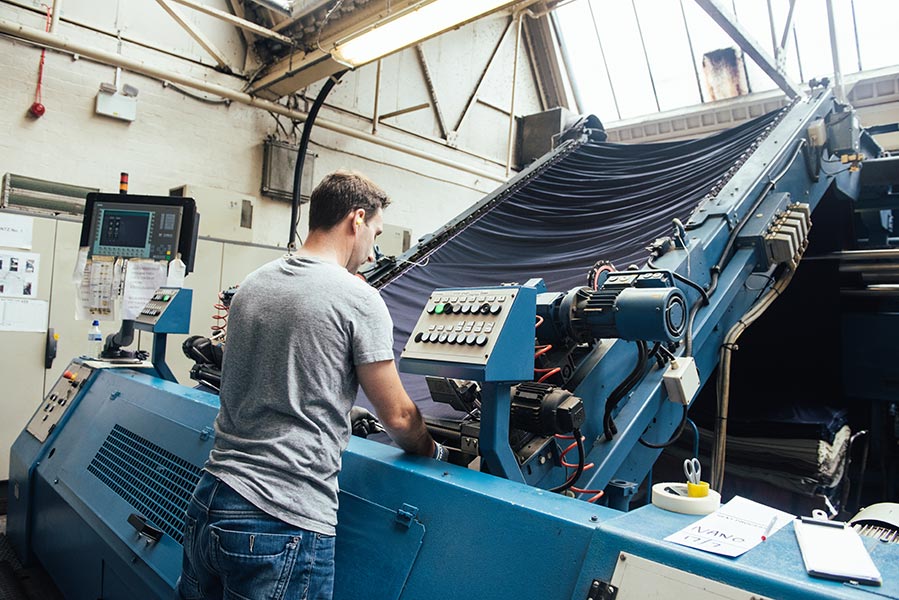 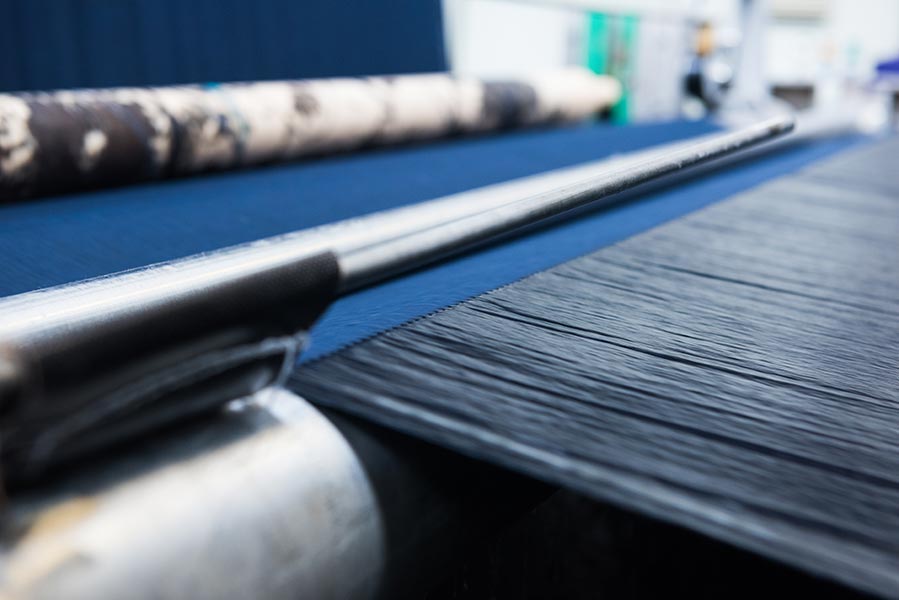 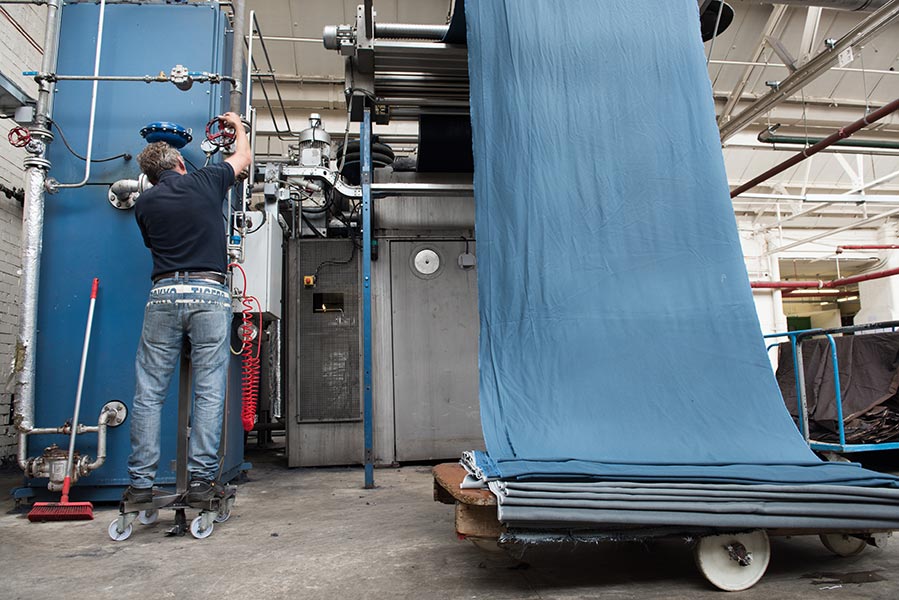 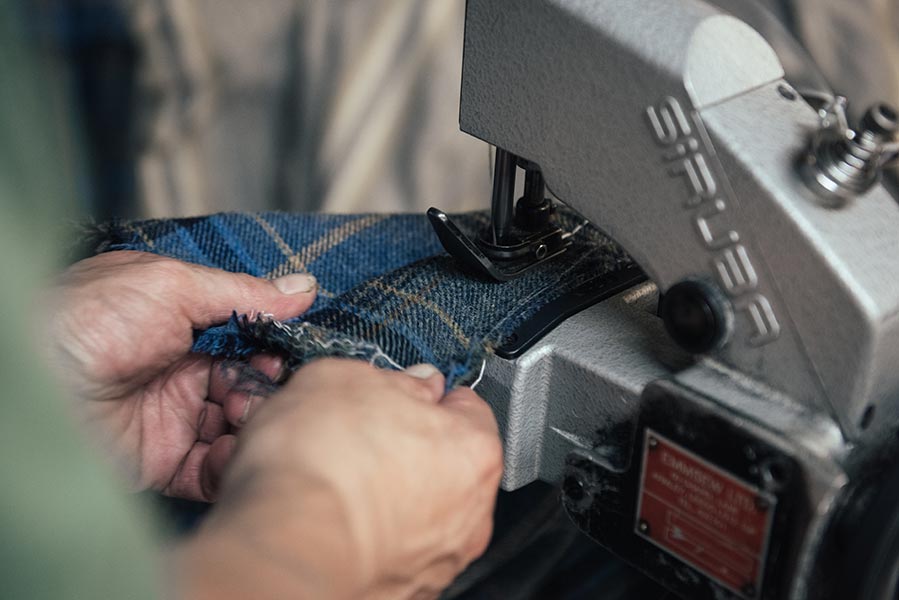 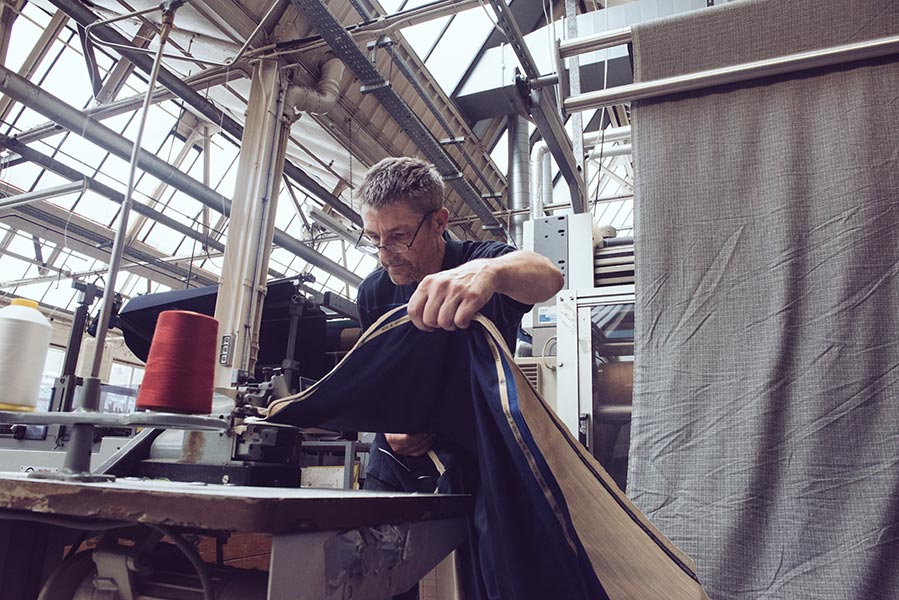 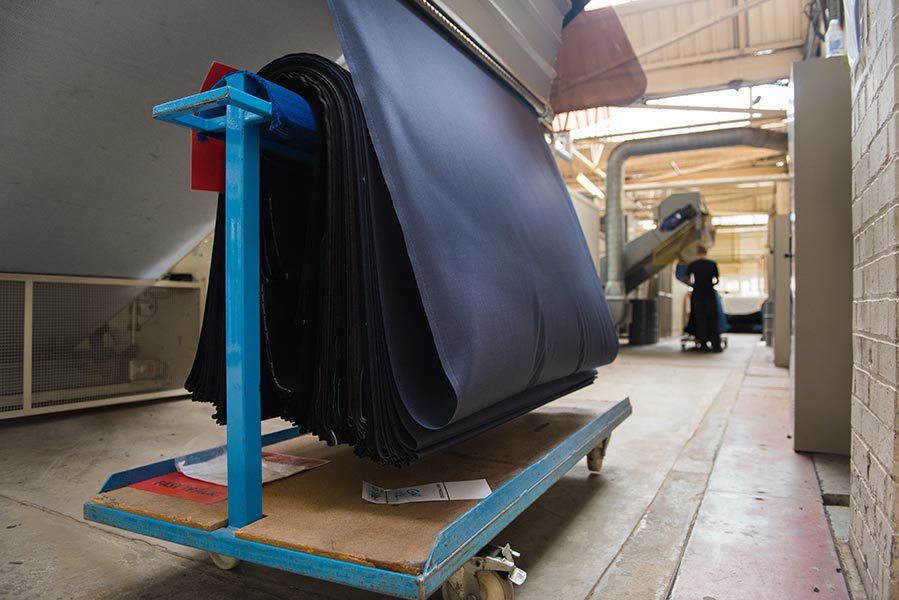 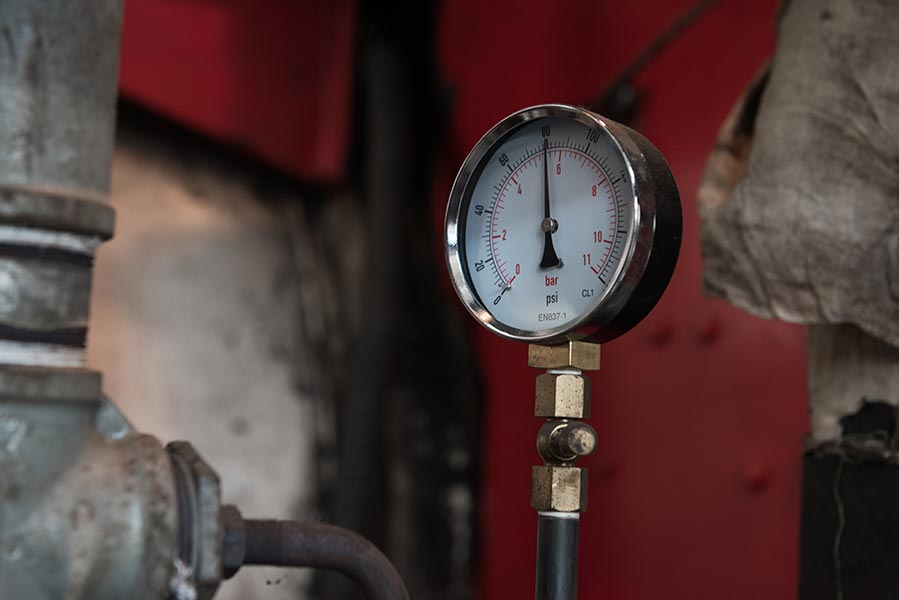 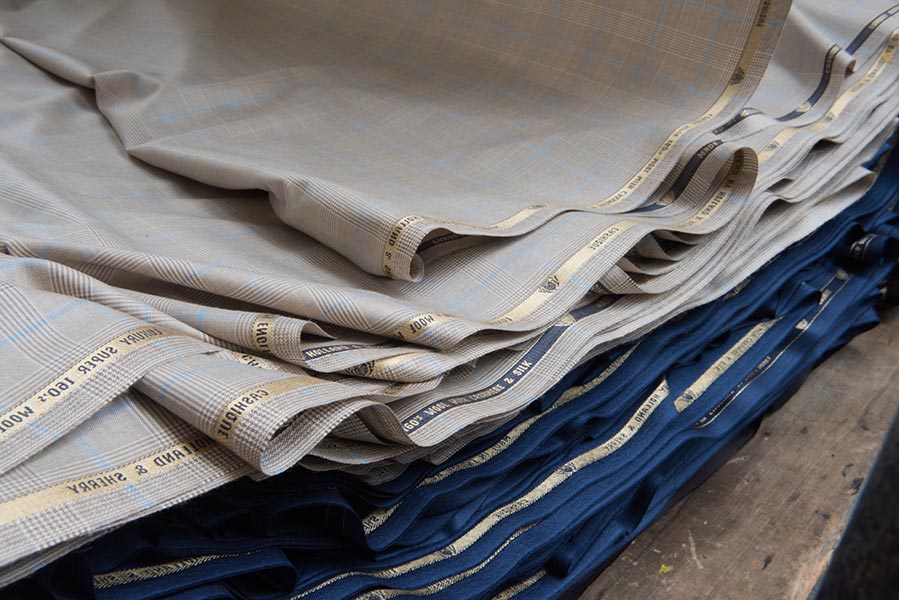 Elsewhere, we take in chemical processes that add anti-odour factor, antibacterial protection and Teflon-like water resistance, plus a machine that might be likened to a giant, hyper-sensitive lawnmower, removing wispy fibres from the surface of fabric lengths as they pass through it. And then we reach W.T. Johnson’s piece de resistance – a pair of Ekofasts: continuous decatising machines which combine high temperature exposure (think 135 degrees) and heavy pressing in one, continuous process to offer stabilisation and a superior handle.

There’s at least one notable figure in the fashion world who relishes the Ekofast’s unique work. “Back in the 80s, when Ralph Lauren was first making a name for himself, he decided he didn’t want what was being sold in Savile Row and everywhere else,” explains Paul Johnson. “He basically wanted something that looks luxurious, but also like it belonged to your grandfather and has been in the attic for a little while. We came on board and what we do remains the typical Ralph Lauren Polo finish today.”

The two machines between which we’re now standing – one of which Johnson’s father Peter, an engineer and now Chairman of the company, bought for £300,000 in the late 70s, the other of which was installed 10 years later - are chiefly responsible for catering to Mr Lauren’s needs: and they’re the only two in the world. “The fabric that comes out of them is what we refer to in the trade as ‘lofty’,” explains Dolley. “Ralph Lauren’s request was for ‘Sheen without shine’ – the feel of cashmere, but the look of Harris Tweed. They came to us and found what they were looking for.” The machines also add quality control factor when it comes to weft straightening. “No one else on the planet has got one, and it’s absolutely essential to a lot of the finishes we offer,” adds Johnson.

“Our job is to enhance our customers’ fabric – to clean it, improve its texture, handle and drape, and stabilise it so that the subsequent garment maker can work with it properly.”

Just as important as all this sophisticated equipment s is the plant’s location: notably because of the water. “A consistent supply of soft, uncontaminated water is absolutely paramount to us,” says Johnson. “Water companies can’t guarantee that for you anymore, as they tanker it in from all over the place and aren’t able to guarantee consistency.” Luckily, for the best part of a century, the company has been drawing its own water from a borehole it drilled in the 1930s. “Most boreholes are 300 feet - ours is 1,500 feet,” says Johnson proudly. “Rain falls on the Pennines, finds its way though various rock strata and down into the culverts, we access it and - low and behold - it’s very consistent and very soft.”

Being situated in the heart of South Yorkshire’s wool traditional wool scene is advantageous, but this is not a company fixated on the past. Always keen to expand its repertoire, W.T. Johnson these days finishes scarves, wraps, throws, and home furnishings including cushions, curtains and seat coverings. “We now do fabric for hotels, banks, office blocks, coaches and also some technical fabrics – we can make them more wearable, or more fit for purpose. Ours is effectively a bespoke service.”

It’s a proud organisation, and rightly so: finishers are the wool industry’s unsung heroes, whose efforts might be compared to that of the very best music producers - anonymous alchemists working tirelessly under the radar while others get all the glory. A quiet nod to their efforts each and every time you pluck your favourite wool garment from your wardrobe is irresistible, once you’ve witnessed their work in progress.